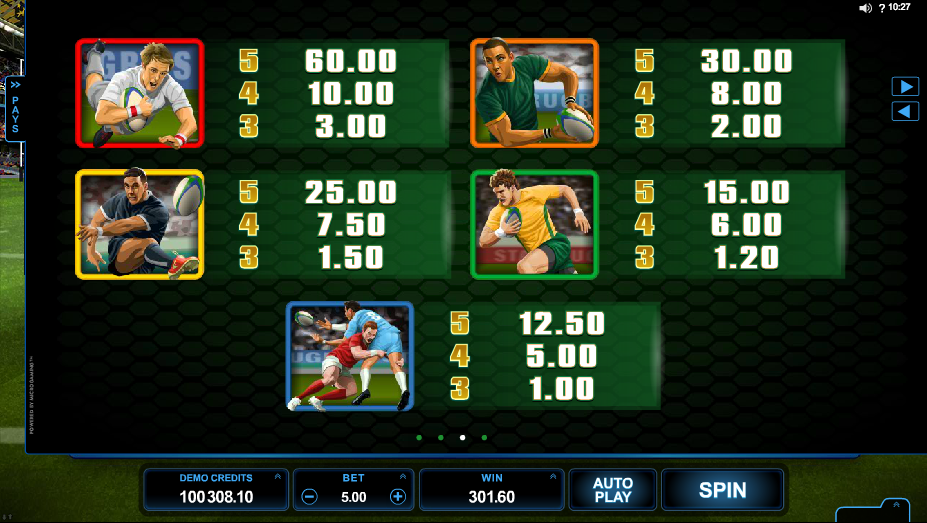 There’s a famous unattributed phrase stating that while football is a hooligan’s game played by gentlemen, rugby is a gentlemen’s game played by hooligans; that may well be the case even today but for our purposes rugby is the theme of this online slot from Microgaming which includes Rolling Reels, free spins and the Wild Pass feature.

Rugby Star is a five reel slot with three rows and 243 ways to win meaning that winning combos are formed as long as matching symbols are in adjacent columns starting from the left hand side. The reels spin against the backdrop of a huge floodlit stadium.

The symbols are all rugby-related and include players from some of the strongest nations – England, South Africa, New Zealand, Australia, Wales and Argentine; other icons are a silver trophy, a stadium, a helmet, and a pair of boots.

The Rugby Star logo is wild and appears stacked on reels three, four and five; it substitutes for all others except the rugby ball scatter symbol.

Always one of our favourites, Rolling Reels means that symbols in winning combinations disappear after paying out and are replaced by more falling down from above. These symbol may make new combos and this process continues until there are no more wins.

Landing three, four or five of the rugby ball scatter symbols will award the following:

The Rolling Reels are also active during this round but now each consecutive win will increase the multiplier for that win – 2x, 3x, 4x, 5x and 10x. It’s not possible to trigger more spins from within this round.

This occurs randomly in the base game and up to two reels (on reels two, three and four) will turn completely wild for a respin and a guaranteed win.

Rugby Star is designed in a way that is particular to Microgaming but that’s no bad thing – it’s good fun to play and the features seem to be easy to trigger. Add some decent sound effects and some nice player animations and this is one to check out.