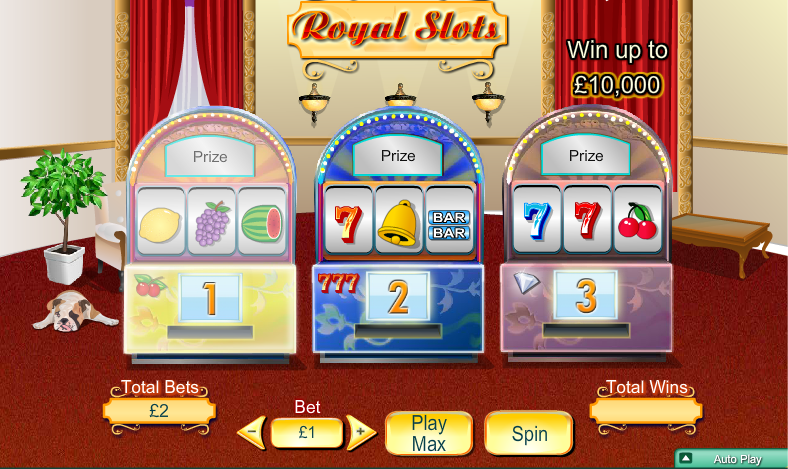 If you’re looking for something simple but attractive and there are no Baywatch repeats on the telly then you may like to check out this interesting online slot from NeoGames. It’s called Royal Slots and although at first glance you may wonder why the ‘Royal’ tag, a closer look will reveal a couple of pointers. Read the full review below for all the regal details.

As you can see from the screenshot above, Royal Slots features three separate mini-machines, each of which operates independently. Each machine has three reels and just the one payline, keeping things simple.

How do we know this is a royal theme? Well we’re assuming that the room in the background is some sort of posh drawing room with huge windows and antique furniture. You may expect a Corgi to be lounging on the floor but it looks more like a Bulldog to us.

You can play one, two or all three of the machines at once just by clicking on that particular slot and the range of symbols is a traditional one including lemons, grapes, watermelons, red sevens, bells, Bars, blue sevens, diamonds and cherries.

There’s no paytable available but if you can line up three matching symbols on a payline your payout will be revealed in the ‘Prize’ panel above the reels. However we do know that the top prize is 10000x your bet on one machine and with a top wager of £20 per slot, that’s a massive £200,000 jackpot.

Well that’s all there is to Royal Slots, it’s essentially three very basic machines which can be played simultaneously if that’s what you fancy. It’s quite addictive though and the way the payout is revealed is interesting – give it a go if you’re stopping by. It has an RTP of 96.00%.