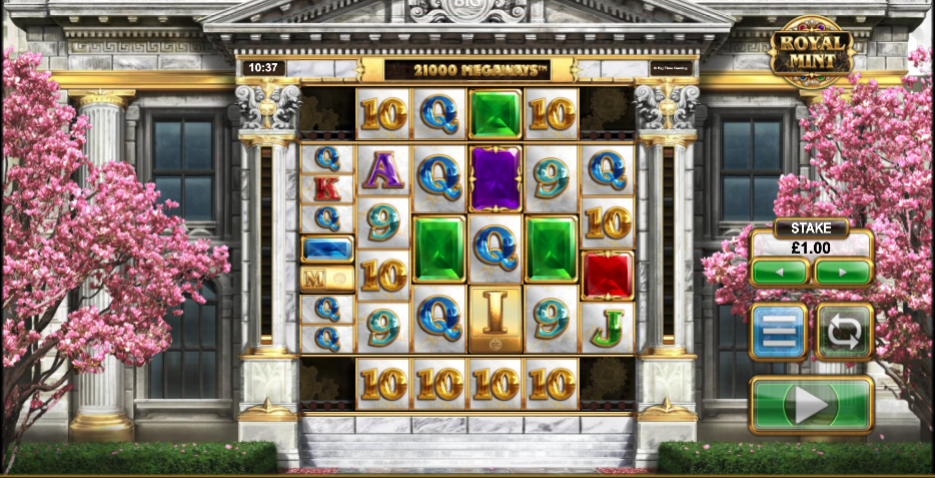 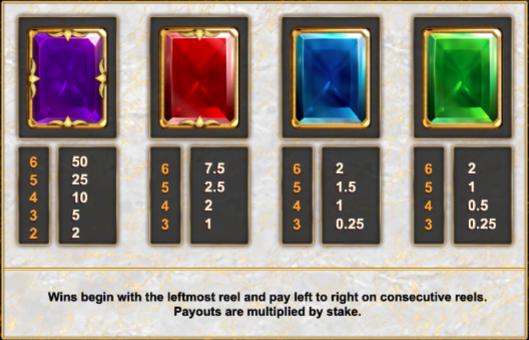 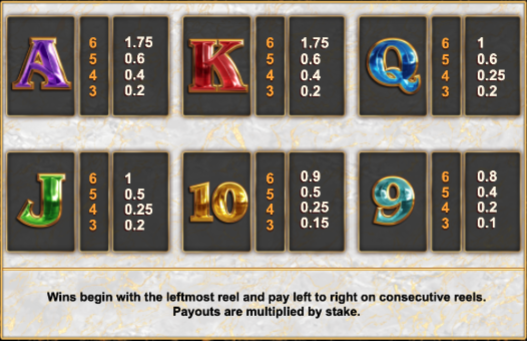 It seems entirely appropriate to develop an online slot with the creation of money at its heart and so here we have Royal Mint Megaways, a release from Big Time Gaming with the popular Megaways payline structure and various bonus feature including the exciting HeartStopper!

Royal Mint Megaways is a six reel slot with up to seven rows and extra horizontal reels at the top and bottom – the payline structure means that with seven rows on each reel there’s a potential 117,649 ways to win. Those reels spin on the impressive facade of the Royal Mint building.

Four rectangular gems in purple, red, blue and green represent the higher value symbols while 9, 10, J, Q, K and A make up the lower values. The multicolour wild appears only on the horizontal reels and will replace all standard symbol; the gold ‘M’, ‘I’, ‘N’ and ‘T’ are the scatter symbols.

Also known as ‘tumbling reels’ or ‘cascades’, Reactions means that all symbols in a winning combo will disappear and be replaced by more falling in from above; more combos can then be made and this continues until there are no more wins.

Landing four M I N T scatter symbols anywhere in view will award an initial twelve free spins with four more for every extra scatter; during this round each Reaction will increase the win multiplier by 1x for any subsequent wins.  The M I N T symbols appear only on the horizontal reels during this feature but landing three there will award four extra free spins.

During standard gameplay each time three scatter symbols land in view a gold ar will be added to the meter either side of the reels; once forty gold bars have been collected an extra scatter is added to the reels on each spin to make it easier to trigger the free spins.

The next time the free spins are triggered after collecting forty gold bars they become the HeartStoppers Enhanced Free Spins and this time the win multiplier starts at 2x and increase by 2x with each Reaction.

Royal Mint Megaways is an enjoyable addition to the existing Megaways line-up and it adds the HeartStoppers gold bar collection feature to the fun. Just like a Mint, hopefully this slot will create some wins for you.