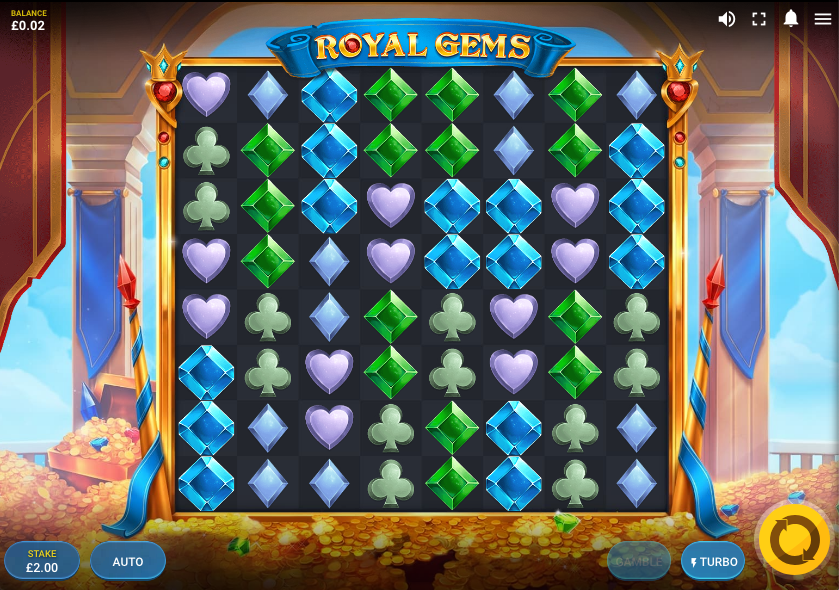 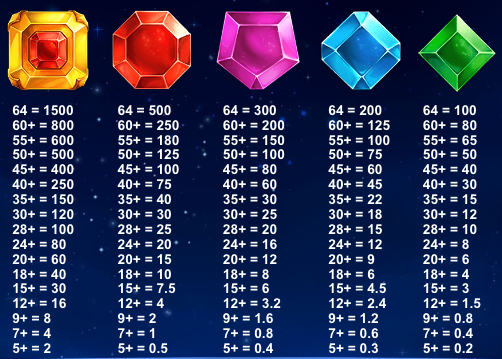 Jewellery of a regal nature forms the theme of this online slot machine from Red Tiger Gaming which relies on the formation of clusters to earn wins; it’s called Royal Gems and its clever gameplay mechanic and huge symbols holds the promise of big wins.

Royal Gems plays out on an 8×8 grid as you can see from the screenshot above and your task is to create horizontal and/or vertical clusters of at least five matching gems; single gems vary in size from singles up to 2×2, 3×3 and 6×6 so it’s possible to create a winning cluster with just one gem.

The gameplay takes place within a gold frame wedged into a huge pile of coins and gems on the balcony of some huge palace; five gems in gold, red, purple, blue and green represent the higher value symbols while playing card symbols make up the lower values.

If you can fill up the whole playing area with clusters you’ll receive a multiplier of 2x for all wins in view.

The only special symbol in Royal Gems is the golden crown and each time it lands at the same time as a winning cluster it will upgrade those symbols to a a more valuable one, increasing your winnings at the same time. More than one crown can land with each upgrading a different cluster.

Royal Gems is a slot which provides us with some enjoyable arcade action and a clever gameplay mechanic which will certainly be profitable for the luckier players – the Crown Upgrade is the royal icing on the cake.