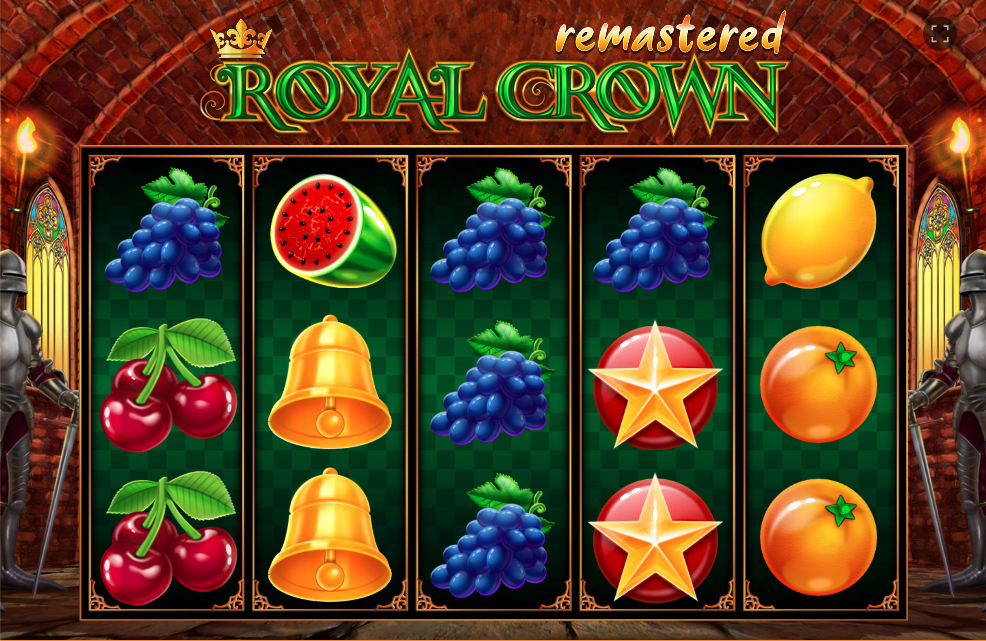 ‘Back to basics’ may be a well-worth political slogan but it’s also a fair description of a number of online slot machines including this one from BF Games; it comes with the title of Royal Crown Remastered and it combines a medieval theme with some fruity action from £0.10 per spin.

Royal Crown Remastered is a five reel slot with three rows and ten fixed paylines although that’s effectively doubled because wins can be formed from right to left as well as from left to right. Stretch the window out to full screen and you’ll get to see the inside of arched hall lined with knights and lit by torches and the glow through the stained glass windows.

The symbols are a familiar bunch and include gold stars, bells, oranges, bunches of grapes, watermelons, lemons and cherries; the corn is wild and it will replace everything else to help form winning combinations.

The wild crown can only land on reels two, three or four and after it’s done any substituting you’ll be awarded one respin with that particular reel held in place.

Depending on the casino at which you’re playing this game there may be an option to gamble your winnings and this is a simple 50/50, red or black choice to try and double up your cash (or lose the lot).

Royal Crown Remastered is a perfect example of a slot which doesn’t offer the world but delivers everything it promises – the graphics are top notch, there’s a nod towards a bonus feature and a decent RTP of 96.17%.