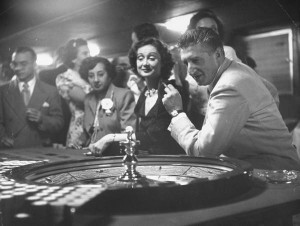 Since the introduction of the modern roulette tables back at turn of the 18th century there have been those who claim to have foolproof systems to win at this game. In fact there once was a time when it was possible to do just that but these were the days when the design spec of the wheels was not so exact and it did not spin in a consistent manner. There are examples of successful punters watching the results of the spins for hours or days, noting on which quarter of the wheel the ball landed most often before placing large bets on that quarter.

Roulette wheels are no longer vulnerable to those weaknesses and aspiring strategists must now place their trust in one of a number of processes which seem attractive at first glance but which will ultimately fail. Several of these are described below:

The Martingale is the most widely known of all roulette betting systems and the theory is that you should double up every losing bet on a black/red, even/odd wager.

The theory is that each time you double up and win you regain what you lost on the previous bets plus a little more.

There are two problems with this:

If the Martingale system relies on doubling up after each loss, the Paroli system is more or less the opposite. The idea is that you bet a flat amount until you win, after which you double your stake to three times.

The logic behind the Paroli system is that wins tend to come in streaks which of course they do. The flaw in that logic is that there is no way to limit or account for the number of times you will lose the 1 chip bets. Once again the zeros will also take their toll if you hit one.

It’s perhaps not unhelpful to think of the D’Alembert system as the Martingale for low rollers. It involves the same process of increasing your bet each time you lose but it also means you decrease you wager each time you lose. Instead of the Martingale prices of doubling your win on a losing spin, it’s only increased by one; win the spin and decrease your bet by one.

It’s a very simple method and an equal number of wins/losses will pit you in credit; however the drawback once more is those pesky zeros/double zeros which increase the house edge.