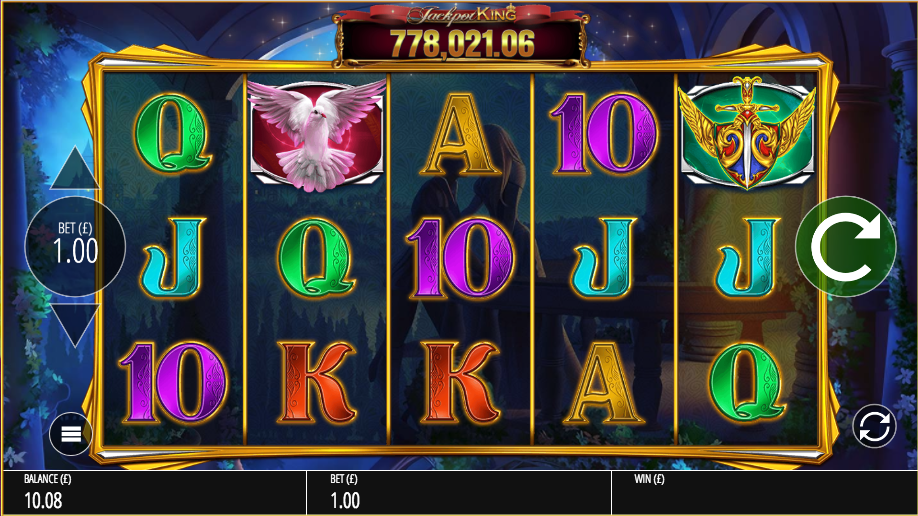 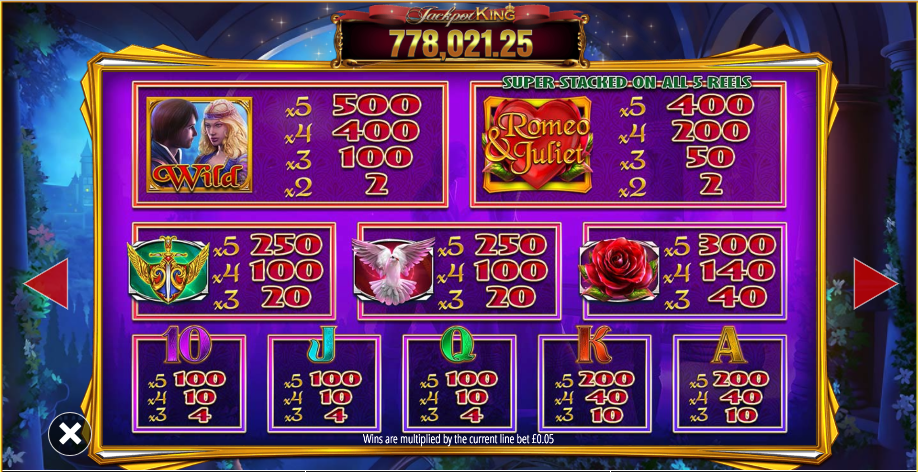 William Shakespeare penned the romantic but ultimately tragic tale of Romeo & Juliet in 1597 and it’s only taken a little more than four hundred years for these characters to make it onto the spinning reels; this online slot is designed by Blueprint Gaming and it comes with a progressive jackpot of which the bard himself would have approved.

Romeo & Juliet is a five reel slot with three rows and twenty fixed paylines; there’s a gentle piano soundtrack to the action which takes place on golden reels against a backdrop of an arched building at dusk.

The high value symbols are the game’s logo (which can appears stacked anywhere), the family crest, a fluttering dove and a red rose; 10, J, Q, K and A represent the lower values.

The symbol with Romeo & Juliet is wild and it will substitute for all others to form winning combinations except for the poison bonus icon.

This is triggered randomly on any spin and you will be prompted to select one of the three hearts on display which will award one of the following features:

This is triggered by landing three of the poison vials on reels one three and five or via the Lovers Super Spin. You’ll receive one of the following at random:

Romeo & Juliet is part of Blueprint Gaming’s Jackpot King progressive jackpot series and the feature  is triggered by landing five jackpot symbols on the reels. You’ll then play a reel set where the aim is to collect crowns before the round ends – manage at least 15 and you’ll get to spin the wheel of fortune which could win you the progressive jackpot.

Romeo & Juliet takes a bit of working out in terms of the various features but once it’s all worked out it’s not too shabby; the Lovers Super Spin hits regularly to help you out but it’s a bit trickier to land the main Poison Bonus. This game has an RTP of 92.59%.