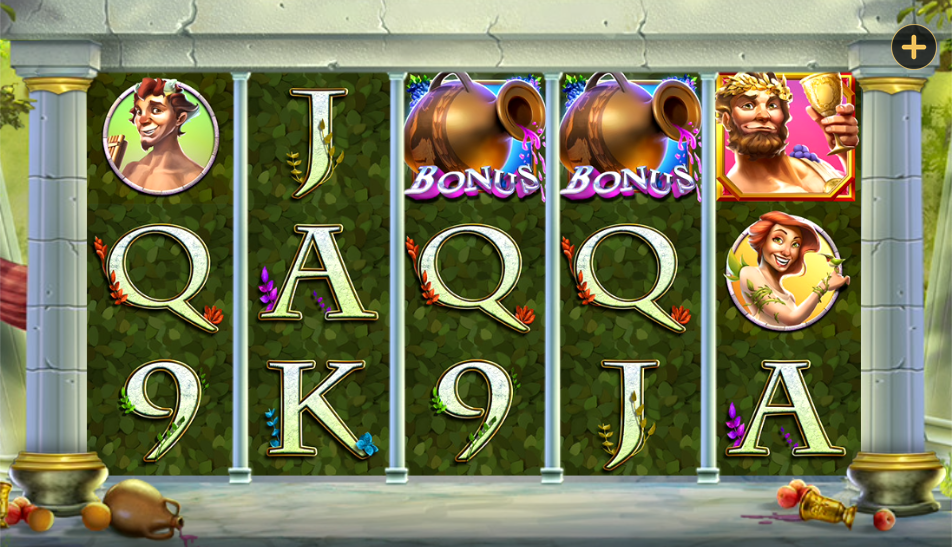 The Roman empire may be long gone but this was a civilisation that knew how to throw a party and that dedication to alcohol and the sins of the flesh is reflected in this online slot from High 5 Games – it’s called Roman Revelry and it offers players several themed bonus features.

Roman Revelry is a five reel slot with three rows and 243 ways to win; those reels spin between pockmarked columns and there’s a great atmosphere created by the backgrounds sounds of a harp and low key partying.

Five of the partygoers represent the higher value symbols while 9, 10, J, Q, K and A make up the lower values; the big ‘Wild’ is wild, it appears only on reels two, three and four and it will substitute for all other symbols except for the amphora bonus icon.

This is a feature we always enjoy and it sees any symbols in winning combos disappear to be replaced by more falling from above – more combos can then be formed and the process continues until there are no more wins or until the Blinking Bucks bonus is triggered.

This is activated with six successful tumbles in the base game or free spins round and you’ll be asked to press ‘Spin’ to stop the blinking light on one of the following three options:

Landing three of the amphora bonus symbols anywhere on reels two, three and four will award ten free spins; it’s not possible to trigger any more spins from within this feature but the wild appears on reels two to five in this round.

There’s something for everyone to enjoy here – drinking, partying, free spins, jackpot prizes and more; Roman Revelry is one of favourite High 5 slots so far and it’s lots of fun.