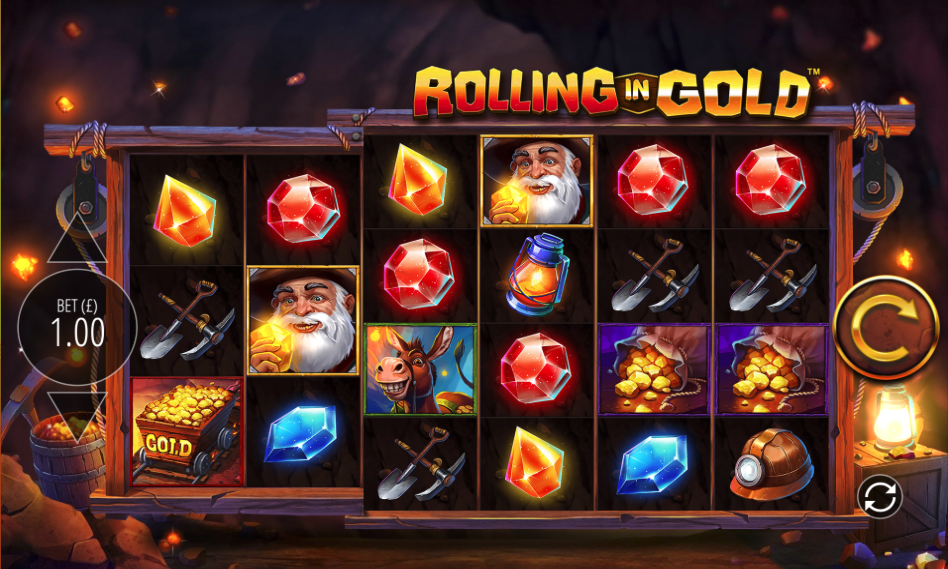 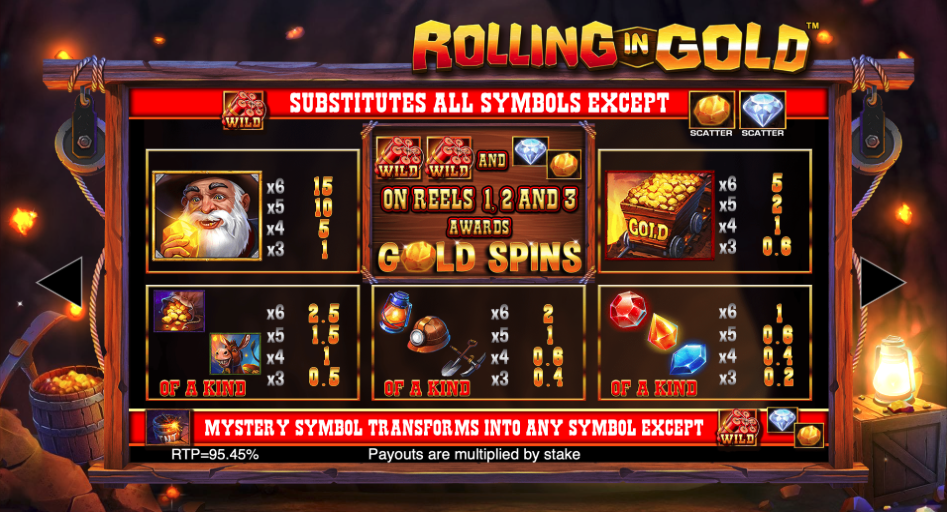 History doesn’t record whether 19th century gold miners enjoyed the odd flutter on an online slot machine but they certainly become part of the story and here we have one more with a mining theme to add to the list; it’s called Rolling in Gold, it’s developed by Blueprint Gaming and it features exploding symbols along with Gold & Diamond Spins.

Rolling in Gold is a six reel slot with three/four rows and 2304 ways to win; all the action takes place deep underground where god nuggets embedded in the mine walls sparkle in the darkness.

High value symbols include the bearded prospector, the cart full of gold, a bag of gold nuggets, the pit pony, the lamp, helmet and mining tools; jewels in red, orange and blue represent the lower values. The TNT is wild, it only appears on reels one and two while the gold nuggets and diamonds are the special symbols.

This is triggered by landing wild TNT symbols on reels one and two along with at least one gold nugget on reel three; the reels will now respin three times with all nuggets locked in place and each extra nugget (or diamond) which lands will also lock and reset the number of spins to three again.

When the spins run out of if all positions are filled then round is over and you’ll receive the total of the amounts shown on the nuggets; if there are any diamonds on the reels you’ll now get to play the Diamond Spins.

The Mystery Symbol is represented by the barrel of explosives and when it lands all instances of it will explode and reveal the same symbol, hopefully helping out with a win or two.

Rolling in Gold is a very playable addition to the long list of mining-themed slots already out there and while there are regular wins in the base game the big wins are definitely waiting in the Gold and Diamond Spins. Keep the sound turned on for some authentic prospector music and sound effects.

Rolling in Gold is an mining-themed six reel slot with three/four rows and 2304 paylines.

The Return To Player percentage for Rolling In Gold is 95.45%.

How To Win On Rolling In Gold?

Where can I play Rolling In Gold?