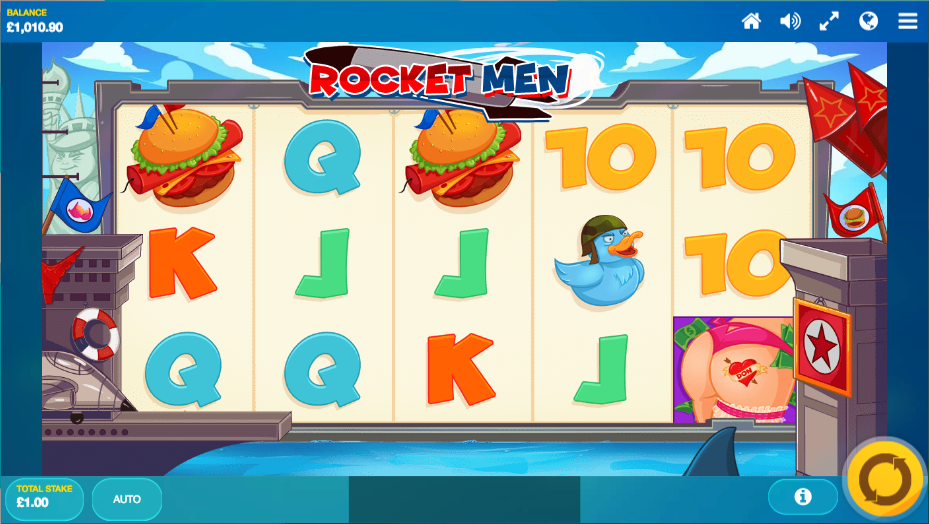 Some online slots are designed to reflect a certain period in time and this releases from Red Tiger Gaming is one of the more prescient we’ve come across; it’s called Rocket Men and it’s themed on the efforts of U.S. President Donald Trump and North Korea’s Supreme Leader Kim Jong-un to petulantly insult each other while threatening armageddon.

Rocket Men is a five reel slot with three rows and twenty fixed paylines; those reels spin in the gap between a U.S. aircraft carrier and a North Korean guard tower with the occasional missile fizzing across the top of the screen.

The high symbols include the politically incorrect female backside, a an explosive-filled burger and a blue rubber duck; 10, J, Q, K and A make up the lower values.

The wild is a red/blue missile which will replace all others to help form winning combinations except for the Don and Kim special symbols.

This is triggered when Don lands on reel one and Kim lands on reel five; they will launch items at each other until one wins or it’s a draw, resulting in the following bonus games:

If Don lands anywhere on reel one he will whack golf balls at the reels, knocking symbols out of the way and allowing new ones to fall into place, hopefully creating winning combos.

Trigger this by landing Kim anywhere on reel five and Kim will launch rockets at the reels, turning them wild where they land.

Political satire is quite a rare thing in the world of online slots so Rocket Men is a welcome diversion, even if it’s relevant lifespan is potentially quite short; it’s lots of fun, full of funny animations, plenty of bonus features and it comes with an RTP of 95.24%.