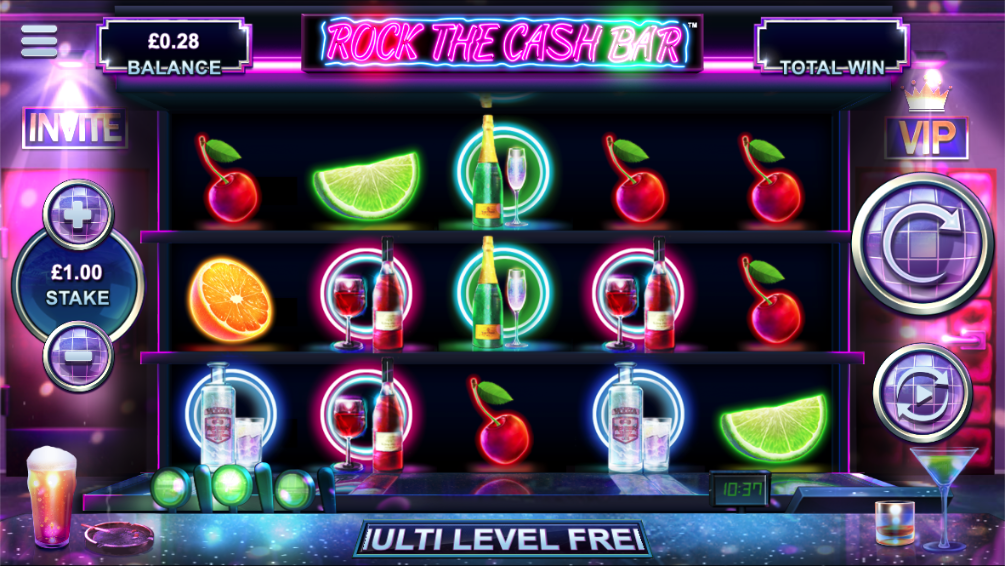 A night out at a neon-lit bar awaits those players who’d like to try out this online slot from Yggdrasil Gaming/Northern Lights; it’s called Rock The Cash Bar – obviously a pun on The Clash’s Rock The Casbah from 1982 – and it offers players random wild symbols and three different free spin modes.

Rock The Cash Bar is a five reel slot with three rows and 243 ways to win in the base game; the symbols spin in the space behind the bar where the bottles would normally be and there are assorted pints and cocktails placed on the sparkling bar top.

Before any spin you may see up to seven spotlights shine across the reels; they’ll then alight on various positions which will turn wild as the reels spin.

This feature is triggered by landing one of the Club Night, Invite or VIP scatter symbols anywhere on reel one and at least one ticket on each of reels two to five; the feature you’ve won depends on which scatter landed and the number of spins is equal to the numbers (1, 2 or 3) on the triggering tickets:

Landing an ‘Upgrade’ symbol during the Club Night or Invite rounds will move you up to the next session; respins may also be awarded at random and these will also add one row to the reel set, up to a maximum of seven rows. This will increase the number of paylines from 243 to 1024, 3125, 7776 and finally 16807.

Rock The Cash Bar ties the clever bonus features into an unusual theme and while the setting may be distinctly 1990s the graphics and animations are top notch; it’s a little tricky to trigger the main free spins feature but there are some big wins waiting when you finally manage it.