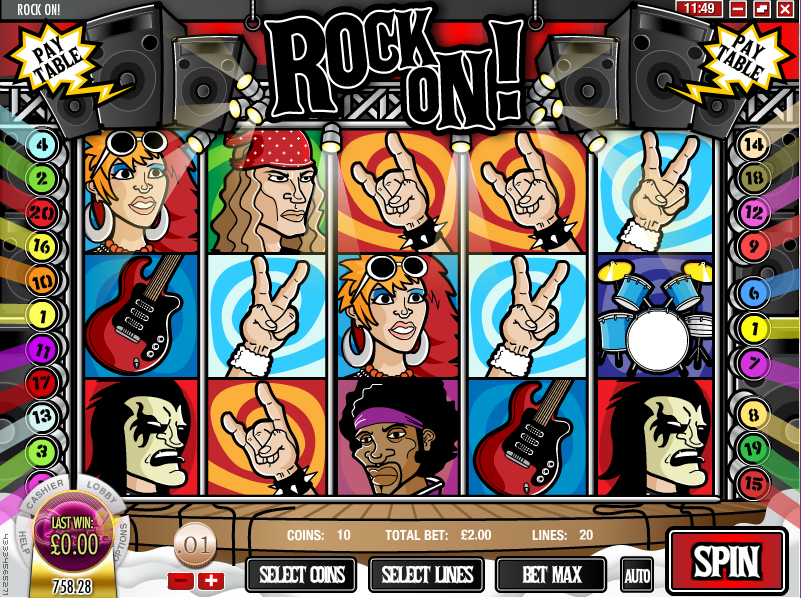 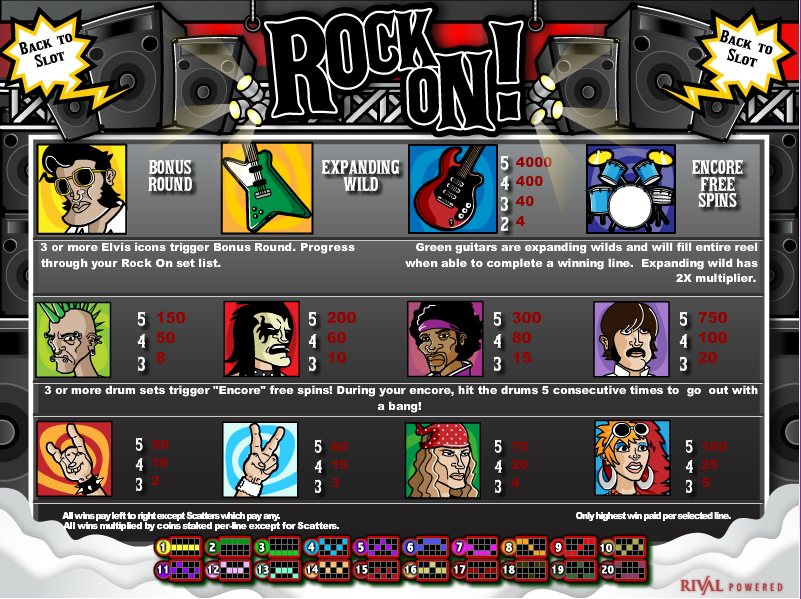 If you looking for an online slot which pays tribute to some of the greats of the music world then Rock On! might just be the answer. It’s developed by Rival Gaming and it’s part of their i-Slots range of games which add a little extra to the gameplay. A guitar riff accompanies each spin.

Rock On! plays out over five reels and up to twenty paylines; there are a brilliant range of symbols, most of which are famous musicians we think we can identify such as Iggy Pop, Alice Cooper, Jimi Hendrix, George Harrison, Axel Rose and then a female whose identity we are unsure of. There are also two hand gestures, a peace sign and the devil sign.

Special symbols include an Elvis scatter, a drum set scatter and two wilds – a red guitar and a green guitar.

If you can land three or more of the drum set scatter symbols anywhere on the reels then five free spins will be yours for the taking. All wins during this feature will be subject to a 3x multiplier and you can see this in action in the video above.

The green guitar is an expanding wild which means it will expand to fill an entire reel if it can potentially make a winning combo. This can lead to even more wins and two or more green guitars are obviously even better.

This is the main feature of this slot and it’s triggered by landing three or more of the Elvis scatter symbols anywhere on the reels. You will now get to play a game in which you control a guitar pick on the strings and you must collect the ‘notes’ as they slide down. Each successful collection wins you coins.

Each successive triggering of the bonus round will provide a different song from the set list.

Practice makes perfect with the bonus game so the more you get to play it, the more you’ll win. Stick at it for the big prizes.

Rock On! doesn’t have as many added extras as some of the other games in the i-Slots range but it’s still got lots to offer. We like the graphics, the animations and the music and the two bonus features are worth triggering. The RTP of 98.00% is also one of the highest we’ve ever seen.