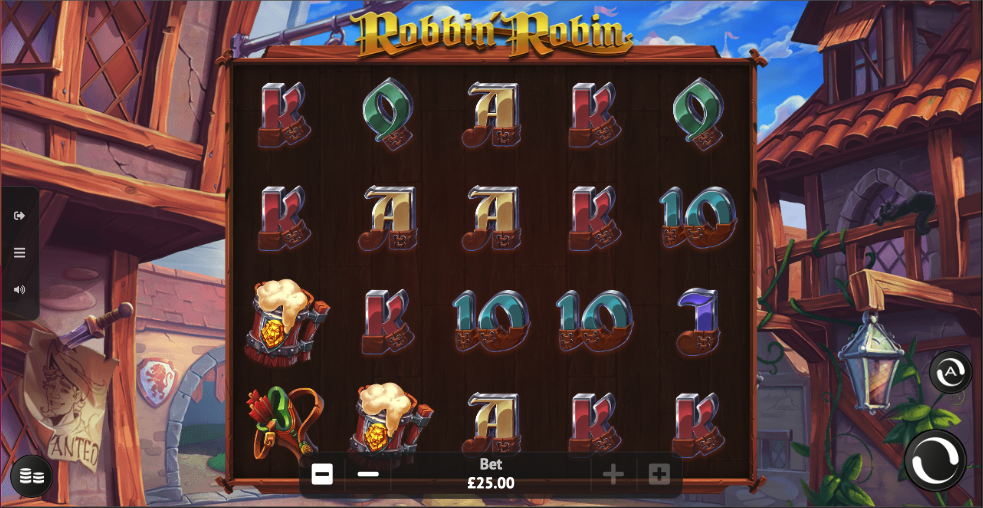 Robin Hood and his Merry Men have provided the inspiration for a handful of online slots in the past and here’s one more to add to that list – it’s called Robbin’ Robin, it’s developed by Iron Dog Studios and it tempts players with five different free spins rounds, one for each Merry Person.

Robbin’ Robin is a five reel slot with four rows and 1024 ways to win; the old city of Nottingham sets the scene for those reels with contemporary houses and a wanted poster of our man, pinned up with a large knife.

High value symbols include the treasure chest, the bag of coins, the quiver, the Lincoln green cap and the tankard; 10, J, Q, K and A make up the lower values. The target is wild and the special symbols are the golden mask and five characters from this story – Friar Tuck, Maid Marian, Robin Hood, Little John and Alan-a-Dale.

This symbols cam land on reels two, three, four and five in the base game and when it does it will transform itself and up to four other symbols into wilds. In the fee spins rounds it will add an extra spin and increase the win multiplier by 1x.

Each of the five characters appears on just one reel and their respective features are triggered by filling up a reel; more than one feature can be triggered at the same time:

Robbin’ Robin is an interesting and and entertaining trip back to medieval England with plenty of bonus features and the inclusion of many well-known characters; triggering more than one feature at the same time is where the big wins are.

Yes! Five free spins round based on the five characters and Golden Mask wild symbols.

The Return To Player percentage for Robbin’ Robin is 96.40%.

How To Win On Robbin’ Robin?

Where can I play Robbin’ Robin?