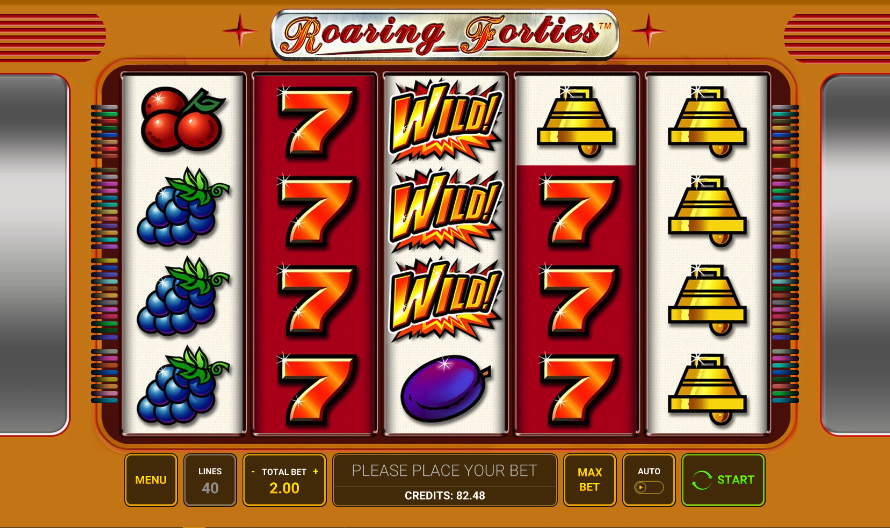 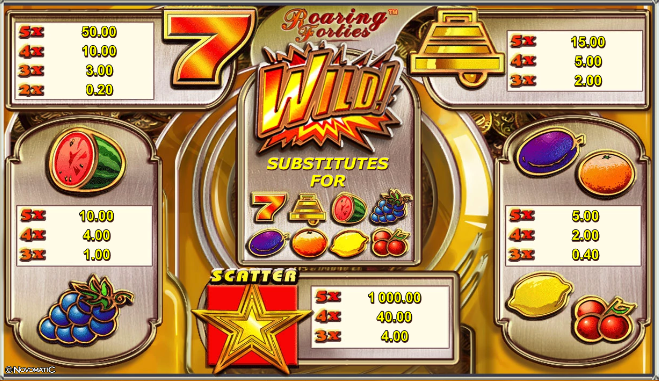 Some online slot machines have titles which don’t seem to  fit the theme and here’s a good example – this is Roaring Forties from Novomatic, a name which refers to strong winds in the southern hemisphere but seems to have no connection whatsoever to the symbols, gameplay of design. Still, it is what it is so keep reading to find out more about this very simple slot.

Roaring Forties is a five reel slot with four rows and forty fixed paylines; those reels spin on the side of what could be a train perhaps? A train called the Roaring Forties? Who knows but there’s a tidy silver plate displaying the name at the top of the screen.

There are a load of familiar, some might say ‘old school’ symbols in use here and they include shiny, red sevens, golden bells, watermelons, bunches of grapes, plums, oranges, lemons and cherries.

The wild is a dramatic, golden ‘Wild’ which appears stacked on reels two, three and four and will substitute for all other symbols to help form winning combinations except for the gold star scatter symbol – that’s the most valuable icon and worth 1000x the total stake for five anywhere in view.

There are no bonus features in Roaring Forties but there’s a gamble opportunity for the risk tolerant accessed by clicking the ‘Gamble’ button after a win; it’s a 50/50 choice to try and double up your win but get it wrong and you’ll lose it all.

Roaring Forties really doesn’t offer much entertainment unless you enjoy slots with rather weak graphics and zero in the way of bonus features; if that sounds like you then by all means spin those reels.