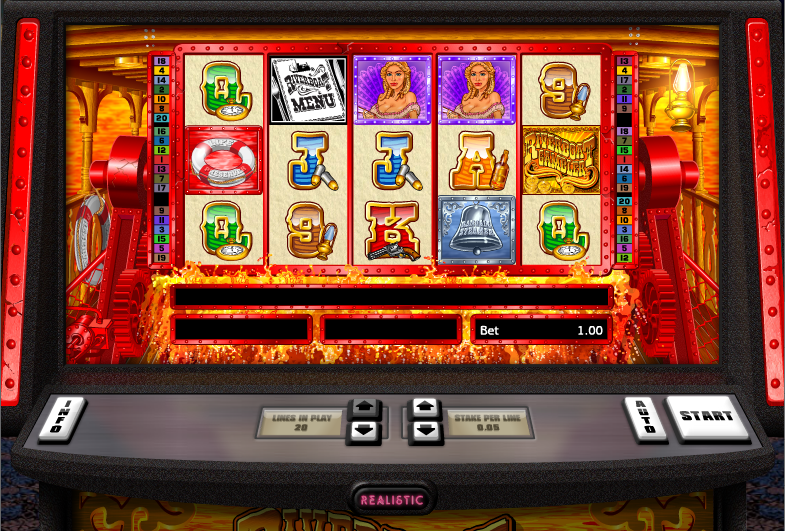 Riverboat casinos have a special place in US gambling history – these floating venues were once the only places to gamble legally in certain Southern states and although the ones that remain are usually permanently docked, there was a time when wagering was only allowed once the boat had left it’s moorings. Riverboat Gambler is an online slot from Realistic Games which takes us back to those dodgy days in a simple but appealing game.

Riverboat Gambler is a five reel and twenty payline slot which. like many Realistic Games slots, is designed to look like a classic machine. The ornate arches of the wooden boat itself are just visible to either side of the reels and the setting sun is reflected on the water.

The usual range of playing card icons make up the lower value symbols but the more expensive ones include a lifebuoy, a ship’s bell, a cabaret girl and the gambler himself.

The game’s logo is the wild symbol and there’s also a Menu bonus symbols which activates the main feature.

There are some free spins available for players who take this particular boat trip; you can trigger them by landing three, four or five of the Menu scatter symbols anywhere on the reels.

Fifteen free spins will now be yours and every win will be subject to a 3x multiplier; as an extra bonus, the spins can be re-triggered by landing more scatter symbols during the feature.

In the base game, a win which includes a wild symbol will earn a 2x multiplier; even better, two, three or four wilds in a winning combo will reward the player with a 3x, 4x or 5x multiplier respectively. Five wilds will win you the top prize of 40000x your line stake.

While this is very similar to other Realistic Games’ slots such as Tutankhamun, the theme is original and the piano-based background music is entertaining. The wild multiplier bonus adds an interesting extra feature.