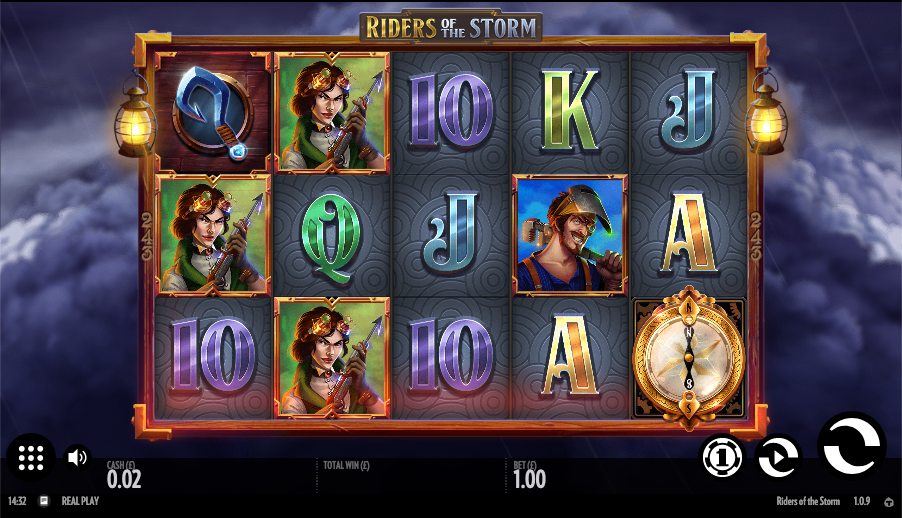 Steampunk and bad weather are the order of the day now as take a look at this online slot machine from Thunderkick; it’s called Riders of the Storm and it offers players Mystery Wild reels and four different free spins options in the main bonus feature.

Riders of the Storm is a five reel slot with three rows and 243 ways to win which means there’s no payline structure – winning combos are formed as long as there are matching symbols on adjacent reels starting from the left hand side. There’s a storm brewing behind those reels which are lit by swaying lamps on either side.

The high value symbols include three of the Riders from this particular story along with the airship’s wheel, an anchor and a grappling hook; 9, 10, J, Q, K and A represent the lower values.

The view through the porthole is the wild symbol and it will multiply by 2x any wins to which it contributes in the base game; the compass is the scatter symbol.

This can occur on any base game spin and you will take pleasure in seeing up to four reels turn completely wild.

Landing at least three of the compass scatter symbols anywhere in view triggers the free spins and, as you can see from our gameplay video, there’s a choice of four different modes:

Three more scatters during this round will kick off a spinner which awards a random number of extra free spins.

Any wild symbol landing during the spins remains on the reels and moves one position to the left with each spin until it falls off to the left; these spins with Walking Wilds are not counted as a free spin so you’ll actually get more spins than the original selection.

Life on a steampunk airship is clearly a difficult life and a slot such as Riders of the Storm is one way to alleviate the constant battle against black clouds; it’s all good fun and the Walking Wilds in the free spins add a bit of sunshine to this stormy affair.