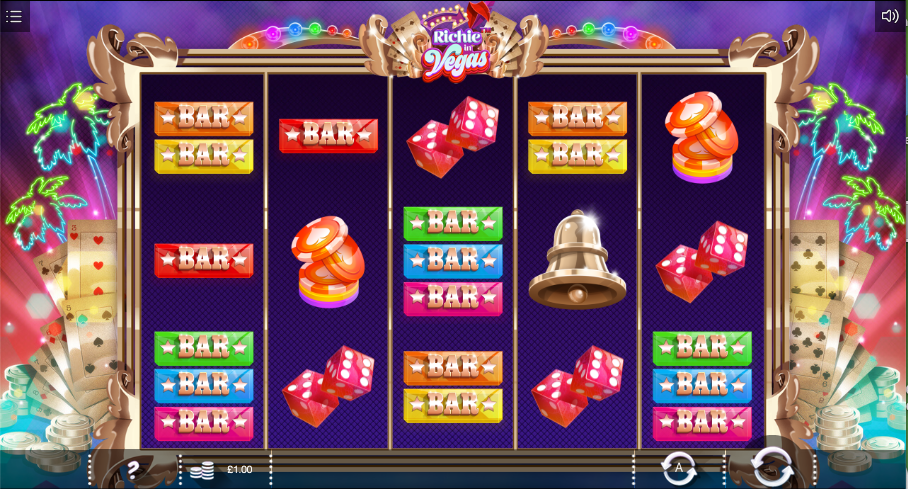 We’re not exactly sure who Richie is but he’s having a good night out in this online slot from Iron Dog Studios called Richie in Vegas; it’s colourful appearance hides expanding wilds, free spins and multiple Wheels of Fortune.

Richie in Vegas is a five reel slot with three rows and twenty fixed paylines; those reels spin within a glitzy, golden frame surounded by the playing cards, casino chips and neon palm trees of the city in the desert.

All the symbols are related to the theme and include Richie, a diamond, pink sevens, golden bells, triple/double/single bars, casino chips and some dice.

The wild is a golden ‘Wild’ which will replace all standard symbols to help form winning combinations; the purple wild appears on the top row only and will expand downwards to cover all positions on that reel. The Wheel of Chance is the bonus symbol and it appears on reel three only.

This is triggered by landing the Wheel of Chance symbol anywhere on reel three and you’ll get to spin the wheel to reveal one of the following prizes:

If the free spins are won and the Wheel of Chance lands again it’s possible to upgrade the next wheel by landing on the correct segment; those are the Winners Wheel, the VIP Wheel and the High Rollers Wheel and they’ll all offer respectively better prizes.

Richie turns into Jackpot Richie during this round with a prize of 2000x your stake for five scattered in any position.

All the best action in Richie in Vegas takes place in the Wheel of Chance round and it’s not that difficult to trigger; once those free spins kick in and the more valuable wheels are triggered it’s all good!