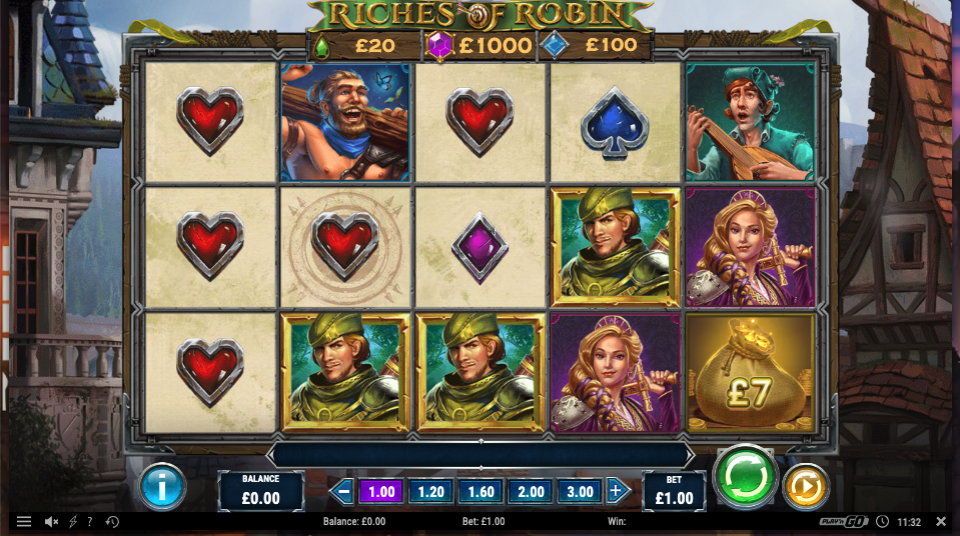 The legend of Robin Hood is an exciting and imaginary one and it’s also influenced a number of online slot machines over the years; Riches of Robin is one more to add to the list, it’s developed by Play N Go and it tempts players with free spins, Heist respins and Quick Hit money bag prizes.

Riches of Robin is a five reel slot with three rows and twenty fixed paylines; the landscape and buildings which unfold behind those reels suggests Black Forest rather than Sherwood Forest but that doesn’t matter because this tale of robbing the rich to give to the poor crosses all borders.

The five high value symbols are all characters from the story including Maid Marian, Friar Tuck, Will Scarlet, Little John and Alan-a-Dale; playing card symbols in blue, red, purple and green represent the lower values. Robin is the wild symbol and he’ll replace all others except for the target scatter.

Landing at least four of the money bag symbols on the reels will award three Heist Respins during which any more money bags will reset the spins to three again; when no more bags land and the spins run out you’ll receive the total of all values on those bags. The bag with the inlaid purple jewel can award up to 1000x the stake.

If you’re lucky and land a money bag on a non-winning spin you may see a shadow of Robin Hood emerge and shoot that bag, awarding you its contents.

Beneath the centre positions on reels two and four is an outline of a target and if you can land two target symbols there you’ll receive between 6 and 20 free spins plus a win multiplier of up to 5x. Landing two more scatters on the targets during this round will award two extra spins and increase the multiplier by 1x – there’s a 10x maximum multiplier and after that you’ll get four extra spins.

The Heist Respins and the Quick Hit features can both trigger during the free spins.

Riches of Robin is a detailed and entertaining tribute to this famous character with three intricate and well-designed bonus features adding to the fun – highly recommended!