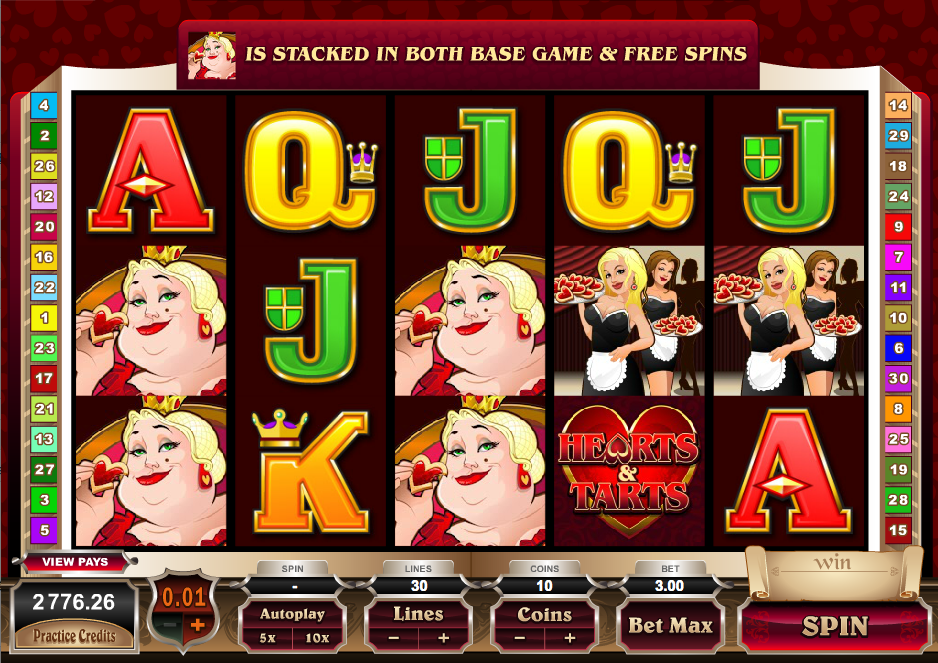 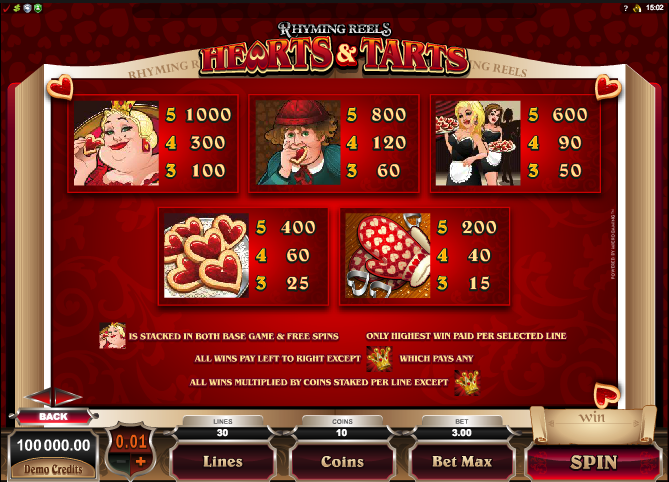 The Rhyming Reels series of online slots is a collection of Microgaming games based on traditional nursery rhymes.  In the past we’ve reviewed Georgie Porgie and Jack and Jill to name a couple but here we have a slot based on the Queen of Hearts.  The story goes something like this  – the Queen bakes some tarts, the Knave eats some of those tarts, the King then gives the Knave a bit of a shoeing and then they carry on as before.

Back to the game in hand though and this is a five reel and thirty payline slot with those reels set inside the pages of a book (similar to the other games in the series).  Aside from the low value playing card icons, the symbols are all theme-related so we have some oven gloves, the heart-shaped tarts, a couple of maids, the Knave and the slightly overweight Queen of Hearts.

Special symbols are a gleaming crown scatter which triggers the free spins and a Hearts and Tarts logo which is wild.

If you’re thinking that ‘stacked Queen’ is a description of the chubby royalty then you’re wrong; it actually refers to the fact that the Queen symbols can appear on top of each other on the reels, making it easier to create winning combinations.

This slot comes complete with a free spins round which is triggered by landing three or more of the crown scatter symbols anywhere on the reels.

You’ll now be rewarded with ten spins during which all prizes will be doubled; land the Queen in a winning combination and she will quadruple that win.  The feature can be re-triggered from within the free spins round.

The only changeable thing is the paylines so if you like to play with low stakes, you can without affecting your chances of triggering the free spins with scatter symbols.

If you like collecting collecting sets of things then give this game a go, along with all the other Rhyming Reels slot; it has a sense of humour and the sound track is quite appealing.