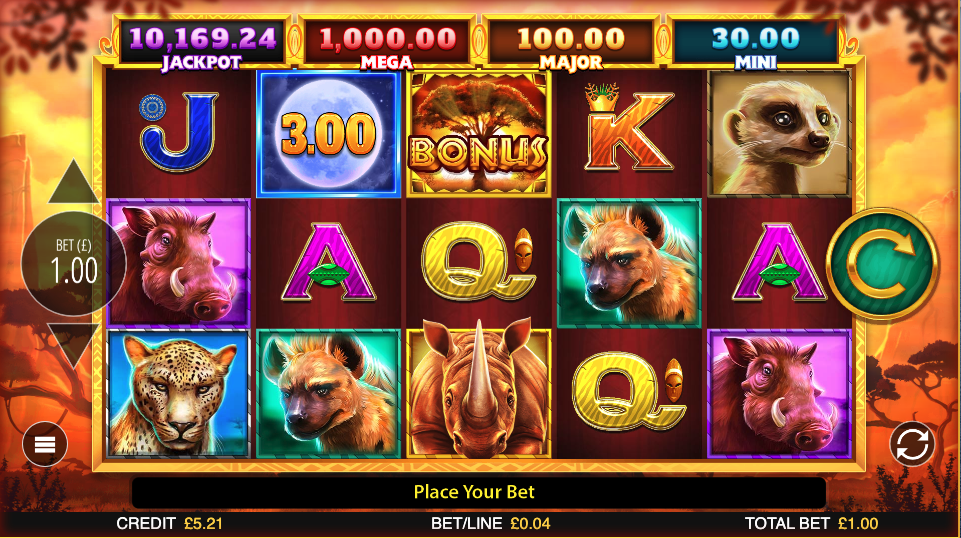 Rhino Rampage is the name of this online slot from Blueprint Gaming but it also seems to be a tribute to some of those characters featured in Disney’s Lion King;  either way it offers players free spins, Lightning Spins and a huge progressive jackpot prize.

Rhino Rampage is a five reel slot with three rows and twenty five fixed paylines; the jackpot prizes hover above those reels while in the background there’s a hot, hazy view of the toasty landscape where all these creatures live.

The high value symbols include the leopard, the warthog, the meerkat and the hyena; J, Q, K and A represent the lower values. The rhino is wild, he can appear stacked on the reels and he’ll replace all symbol except for the Baobab bonus and moon symbols to help make winning matches.

Landing three of the Baobab tree bonus symbols anywhere on reels one, three and five will award five free spins during which any three adjacent reels will join together to form large, 3×3 symbols to make those wins a bit easier to achieve. Landing a 3×3 bonus symbol will award three extra spins while a 3×3 moon will trigger the Lightning Spins round.

These spins are triggered via the Rhino Rampage spins or by landing at least six moon scatter symbols anywhere in view; you’ll now receive three free spins with all those moons held in place and if any more land the spins are reset to three again. There are only blanks and moons during this round and if three subsequent spins result in blanks or all positions are full of moons the feature ends and the the player is awarded the total of all prize amounts shown.

Landing a Cashpot symbol will award the respective total (Mini, Major or Mega) but if all positions are filled with moons the big progressive jackpot prize is won.

Some nicely drawn animals set the scene for an enjoyable slot with two potentially lucrative free spins rounds and a progressive jackpot to aim for; certainly worth stopping by for.