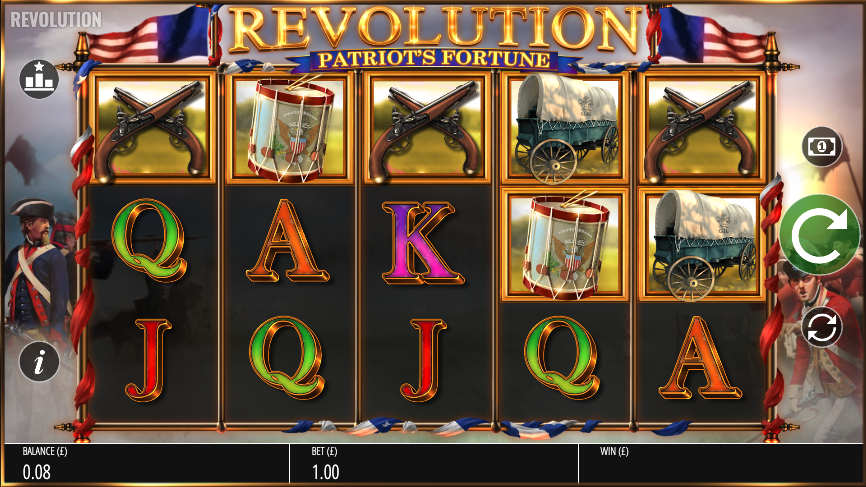 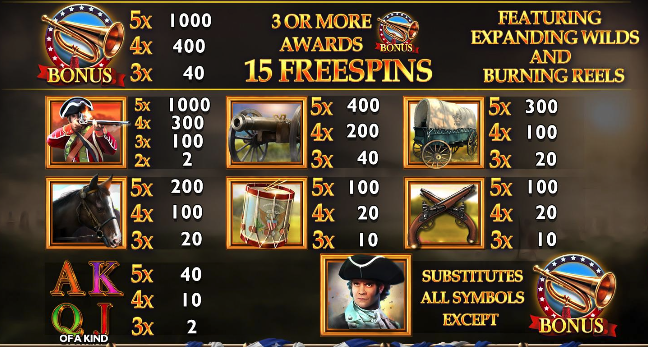 The Revolutionary War featured a youthful American nation trying to escape the grip and the taxes of the British Empire and now it’s also the inspiration behind this online slot from Blueprint Gaming; it’s called Revolution Patriot’s Fortune and ti comes with free spins, expanding wilds and Burning Reels.

Revolution Patriot’s Fortune is a five reel slot with three rows and twenty fixed paylines; early American flags adorn the golden reels which are flanked with soldiers from both sides of the conflict.

The high value symbols include a British soldier, a cannon, a wagon, a horse, a drum and a pair of pistols; J, Q, K and A represent the lower values. The American soldier is wild and he’ll replace all standard symbols to help form winning combinations; the bugle is the scatter.

Landing at least three of the bugle scatter symbols anywhere in view will award an initial fifteen free spins; once the spins are underway look out for the wild symbols because they’ll trigger a neat feature in which those wilds will expand to fill all positions on their reels and trigger the Burning Reels. In Burning Reels al instance of J, Q, K and A will be burned away allowing more symbols to drop in; any new low values will also be burned away and this continues until only high value symbols are left in view – the payout will then be made and hopefully it’ll be a good’un.

More spins can be triggered by landing three more bugles in this round.

Revolution Patriot’s Fortune is a typically high quality Blueprint Gaming slot with the added extra of the enhanced free spins in which those Burning Reels add a bit of extra excitement to that feature – it’s a lot of fun.