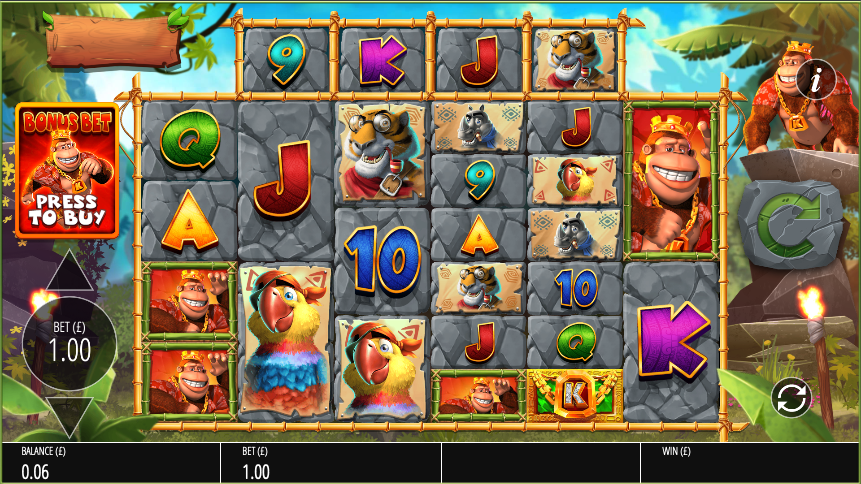 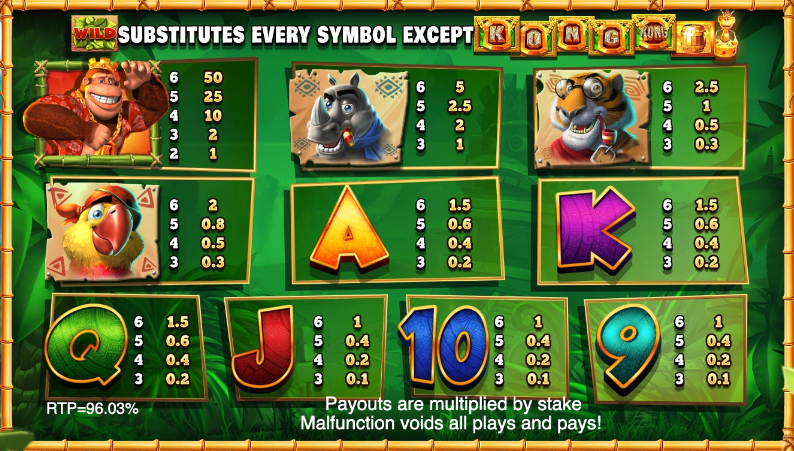 There’s a touch of Nintendo’s Donkey Kong about this online slot from Blueprint Gaming which is titled Return of Kong Megaways and comes with a barrel-chucking ape along with Big Time Gaming’s Megaways payline structure – read all about it here.

Return of Kong Megaways is a six reel slot with variable rows and a potential 117649 ways to win – that number is made possible with up to seven rows on each reel and the horizontal reel at the top. There’s a jungle scene in the background with our blinged-up ape sitting in the top right hand corner.

The four high value symbols include Kong, a rhino, a tiger and a parrot; 9, 10, J, Q, K and A represent the lower values.

The wild symbol only appears on the horizontal reel and it will substitute for all others to help form winning combos except for the various golden scatter letters and symbols.

Return of Kong uses cascading symbols which means that symbols in winning combos will disappear and be replaced by more falling in from above – more combos can then be formed and the process continues until there are no more wins.

On any spin Kong might chuck a barrel at the reels which will add up to 100 mystery symbols, each of which will transform into matching ones when the spin stops.

This is triggered by landing the four letters ‘K’, ‘O’, ‘N’ and ‘G’ anywhere on the lower reels for whcih you’ll receive twelve free spins – any extra scatters will award five more spins.

During this round each subsequent cascade wiill increase the multiplier for any wins by 1x with no upper limit; collecting three Golden Monkeys in this feature will award two extra spins and increase the minimum number of Megaways paylines possible.

It’s also possible to buy your way straight into the feature in the folliwng ways:

Megaways, collapsing reels and a nod to 1980s video games is always going to be a winner in our book – chuck in some free spins and you’ve got a top notch slot not to be missed.