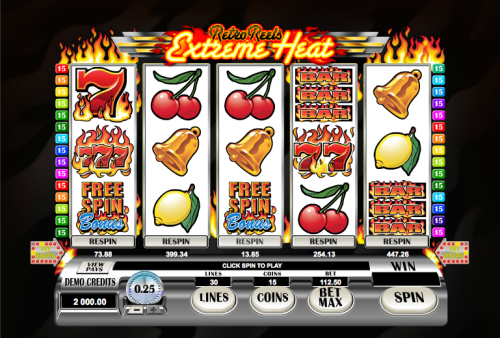 Retro Reels Extreme Heat is a an exciting and fast moving online slot from Quickfire which is also a nod to some of the classic Vegas-style games which first inspired the industry.  All the traditional symbols are here but there’s also some additional extras which mark the game out as a little different. The ‘respin’ feature in particular is one we’ve never seen before.

Retro Reels looks like a three reel slot stretched out to five reels; it features thirty paylines and the symbols are all those items you expect to see on the reels in the slot halls of Reno, Vegas and Atlantic City.  We have cherries, lemons, bells and single, double and triple bars and sevens.  The singles, doubles and triples can be mixed on a line so for example a single seven and two doubles would be a winner.

Bonus symbols include a free spin scatter and a burning dollar sign wild.

We’ll start with the respin option and after each spin of the reels you will get the option to respin a single reel.  This is obviously a good thing if your original spin just missed out on a big payout.

All you need to do is click the ‘respin’ button below the reel you want to spin but beware – a reel with a large potential prize will cost more than one with a lower possible reward.  You can respin as many times as you wish but you can find your bankroll decreasing quickly if you’re set your sights on a particular prize.

To prove this is more than just a classic slot it also features a free spins round and this can be triggered by landing three, four or five of the free spin symbols anywhere on the reels.

You will receive 10, 15 or 20 spins respectively and during this bonus game all wins are doubled. The extra good news is that you can re-trigger the spins while playing your spins.

Microgaming seems to have the knack of adding something a little different into it’s slots and Retro Reels is no exception; it belts along at a breakneck speed with a pounding soundtrack but be careful that you don’t use up all your money on failed respins.