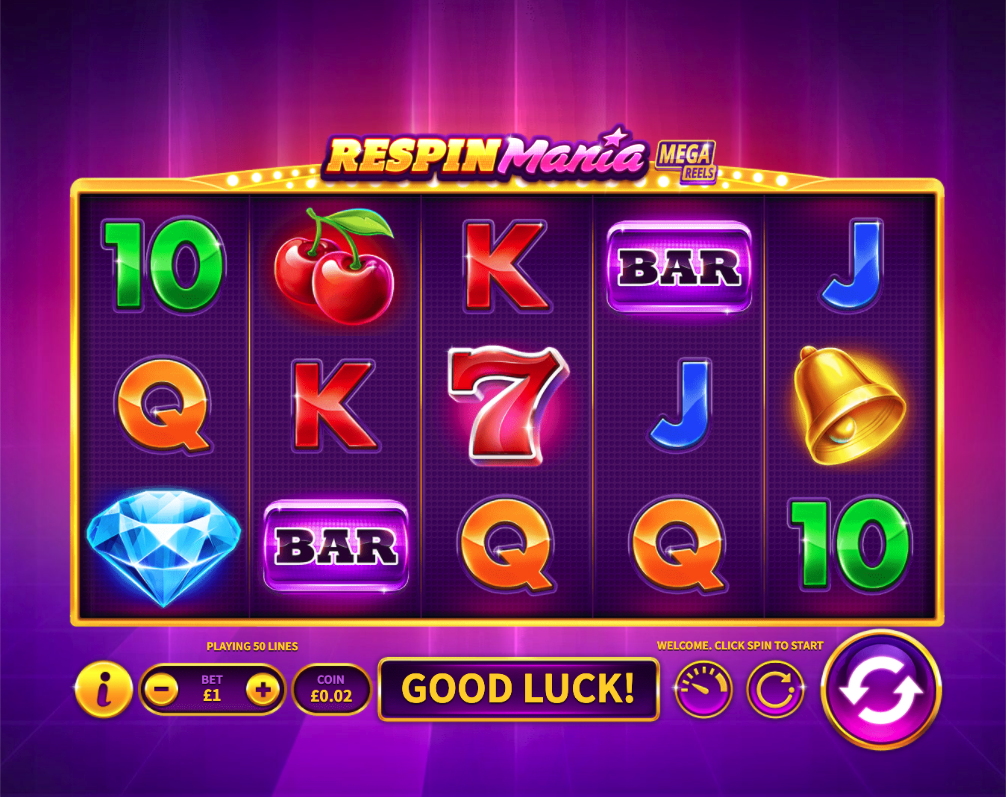 If you’ve previously played Respin Reels from developer Skywind then you’ll be pleased to learn of this juiced-up version which features expanding reels, free spins and up to one hundred paylines; it’s called Respin Mania Mega Reels and each spin will cost between £0.50 and £150.00.

Respin Mania Mega Reels is a five reel slot with three rows and fifty paylines in the base game; the design retains the glossiness and sparkle of the original long with some twinkly piano music which can quickly be muted if it gets on your nerves.

Traditional symbols are the order of the day with red sevens, bars, bells and cherries as the higher values and 10, J, Q, K and A as the lower values; the golden ‘Wild’ is wild, it appears on reels one, three and five and it will replace everything except for the diamond scatter symbol.

This is the feature around which the game revolves and it’s triggered each time a winning combo is formed or at least three scatter symbols land; all those symbols will now lock in place and an extra row will be added to the reel set, adding an extra ten paylines. More winning combos (or additional symbols on existing combos) will also be locked and another ten paylines added up to a maximum of eight rows and one hundred ways to win.

This feature ends when there are no extra wins/symbols or if all positions are locked, after which the payout is calculated and the reel set returns to its normal height.

Landing at least five scatter symbols anywhere in view will trigger this feature and there are plenty of spins to be won because there are up to one hundred reel positions available in which to land and lock those diamonds:

More spins can be triggered indefinitely during this round and if the Mega Reels Respin is activated, an extra wild symbol will be added to the extra reel.

The Mega Reels Respin feature is clever stuff and it makes the gameplay feel like one long bonus feature; if you enjoyed the original slot then you’ll really appreciate this one.