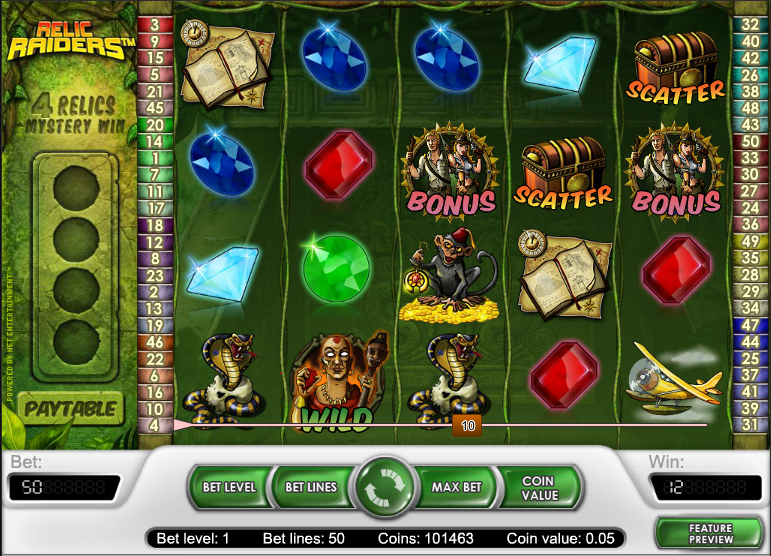 Relic Raiders is an online slot machine from Net Entertainment which could described as something of a cross between Tomb Raider and Indiana Jones; it’s the tale of global tomb-robbing as our heroes travel around the world enriching themselves at the expense of ancient civilisations.

Relic Raiders features five reels, four rows and an impressive fifty paylines; to the left of the reels you will see a mystery win column which we’ll explain presently but the reels themselves contain a range of nicely-drawn symbols.  Coloured gems are the lower value symbols and higher up the scale  there’s a snake, a monkey, a map and a seaplane.

Special symbols include a menacing tribesman wild, a treasure chest scatter and a bonus symbol featuring our male and female heroes which triggers the bonus game.

The column on the left is the focus of this feature and the four empty spaces need to be filled up gold relics. These relics are found in the bonus game and once in place will last 36 hours from your final spin.  So if you have three in place, make sure you play the game again within a day and a half to complete the stack.

When you have all four you will play a short game in which you pick one statue which will reward you with a substantial win.

Three of the bonus symbols from left to right on an active payline will win you this feature and you’ll be presented with a map showing four historic locations.  At each location you will enter a tomb and break open items looking for the relic.  Urns will also earn you prizes but if you uncover a giant spider the round is over.

There or more of the treasure chest scatter symbols will earn you the free spins.  The first thing you need to do is click one of the chests to determine the number of spins and the multiplier.  During the feature if you can land two more chests you will receive more spins and this can happen quite regularly.

The best advice we can offer is not to forget to come back to this game if you’ve already managed to collect one or two relics.  Set your alarm so you’re back within 36 hours.

This is another great slot from Net Entertainment featuring two bonus games and a base game bonus feature.  The Mystery Relic column will mean you’re tempted to come back for more.  The only downside is a rather low RTP of 90%.