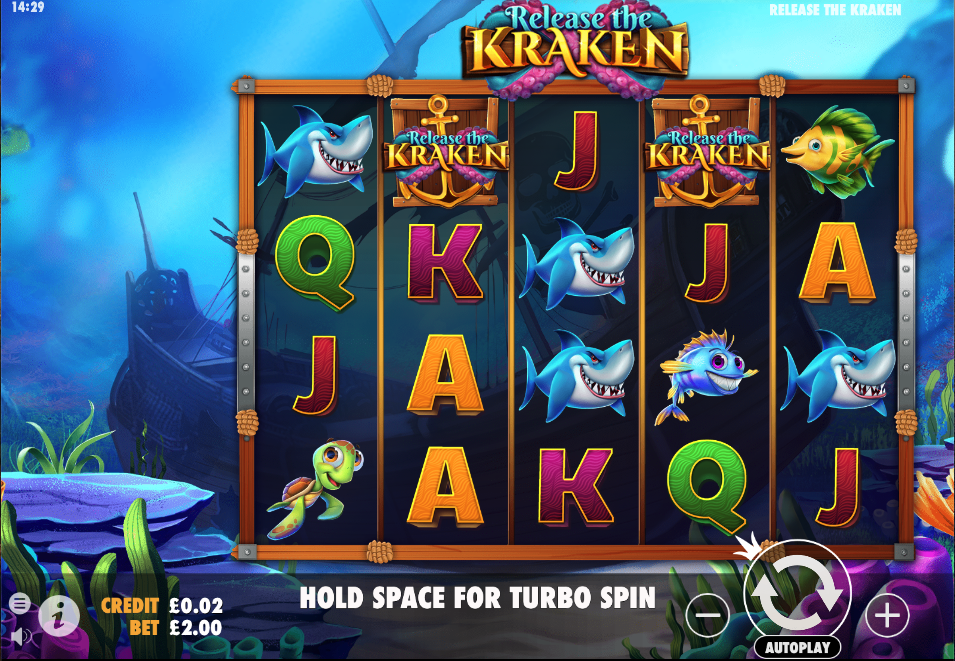 ‘Release The Kraken!’ was a line first spoken in the 1981 movie Clash of the Titans but it’s endured into popular culture since then, only now returning beneath the ocean waves in this online slot machine from Pragmatic Play which offers players some random wild features as well as two separate bonus games.

Release The Kraken is a five reel slot with four rows and twenty paylines in the base game; the action is set beneath the ocean waves where colourful flora sways in the gentle seabed currents.

The theme-related symbols include the games’ logo, the shark, the turtle, the blue fish and the yellow/green fish; J, Q, K and A make up the lower values.

The bubble is wild and it will substitute for all standard symbols to help form winning combos; the ship, the ship’s wheel and the treasure chest are the three bonus symbols.

This can occur on any base game spin and you’ll be prompted to select one of the tentacles which appears on the reels to reveal one of the following features:

This is triggered by landing the bonus ship on reels one and three and either the ship’s wheel or treasure chest on reel five:

Roaming Kraken (Ship’s Wheel) – this starts with a picking round to reveal numbers of free spins until Collect is found; the paylines increase to forty and each wild symbol which lands increases the win multiplier by 1x and stays on the reels, moving to different positions until the round ends.

Release The Kraken is certainly an enjoyable romp beneath the ocean waves but it’s also a slot with plenty of variation and creativity in the gameplay; take the plunge and find out why we liked it so much.