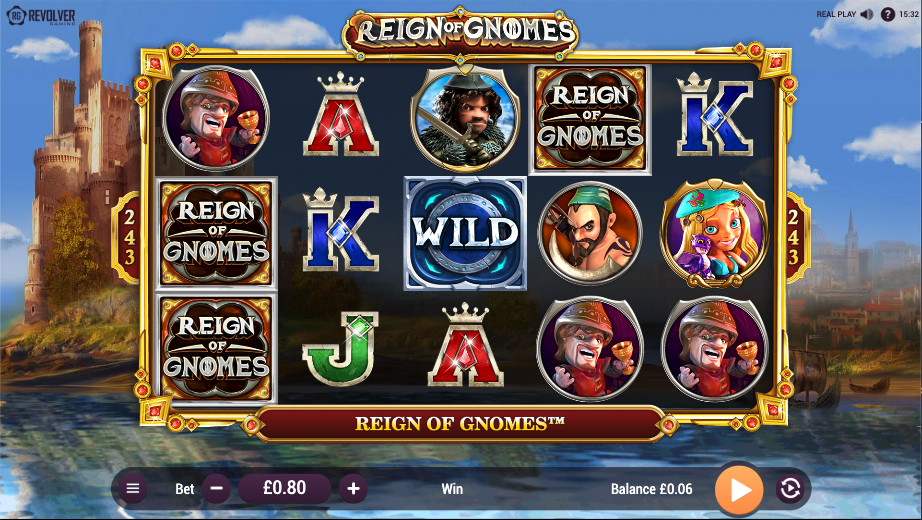 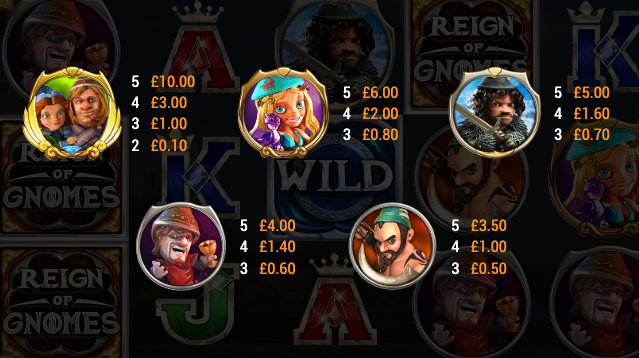 George R. R. Martin’s fantasy epic Game of Thrones may have reached a conclusion but that doesn’t mean the swords and sorcery has to stop, especially in the world of the online slot machine; here we have Reign of Gnomes, a release developed by Revolver Gaming offering players a glimpse into a mystical land along with enough free spins to fill the Iron Throne.

Reign of Gnomes is a five reel slot with three rows and 243 ways to win which means there’s no payline structure – wins can be formed as long as there are matching symbols in adjacent reels starting from the left hand side; the backdrop to the gold-trimmed reels is a sunny land of castles, sunny skies and sailing ships plus probably a lot of bloodshed.

The high value symbols are the games’ logo plus five characters from this story – all gnomes in various states of warlike behaviour or other poses while 10, J, Q, K and A make up the lower values.

The wild symbol is a stony ‘Wild’ which will substitute for all other standard symbols to help form winning combinations; the dragon egg is the scatter symbol.

This is triggered by landing three, four or five of the dragon egg scatter symbols anywhere in view foe which you will receive 5, 10 or 20 free spins respectively; on each spin the Golden Wheel will award one of the following mini-features:

After all that it’s still possible to trigger more spins with three more dragon eggs.

Reign of Gnomes is a fitting and humorous tribute to the television series and it even has some background music to match; the graphics and gameplay are top notch and the lengthy free spins round is an opportunity to make a bit of cash – check this slot out!