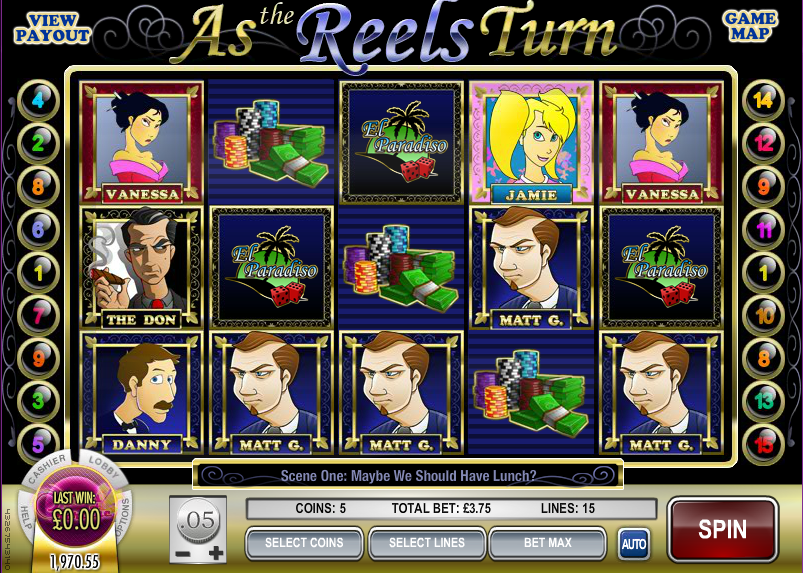 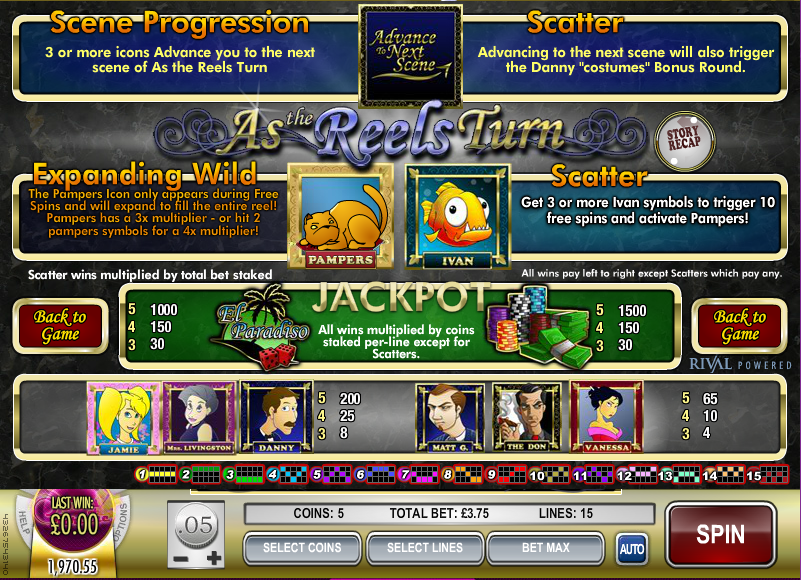 If you’re familiar with this particular series of online slots then you’ll no doubt be delighted to play As The Reels Turn 3, the third instalment in this soap opera-style tale of the various dubious characters who frequent the El Paradiso club. It’s a long and involved story and this final part of the tale is subtitled ‘Blinded By Love’. It’s developed by Rival Gaming and is one of their i-Slots range.

As The Reels Turn 3 is a five reel slot with fifteen paylines and, like the previous two games, the symbols are all related to the El Paradiso club. They include Vanessa, The Don, Matt G, Danny, Mrs Livingstone, Jamie and the El Paradiso logo.

Special symbols include the ‘Advance to Next Scene’ icon, Ivan the fish and Pampers the cat who only appears during the free spins.

This is how you progress the storyline and it’s triggered by landing three or more of the ‘Advance..’ symbols anywhere on the reels. You will now get to watch a cut scene and you can check you progress by clicking the ‘Game Map’ button above the reels.

The Danny Bonus Game will also be triggered now and all you have to do here is pick a costume for him to wear; the more the audience likes it, the more you win.

Landing three or more Ivan the fish symbols anywhere on the reels will trigger this feature. You will receive ten free spins with the addition of Pampers the cat to the reels. Pampers is an expanding wild who will fill the entire reel if she lands and she will also earn you a 2x or 3x multiplier for any wins depending on whether you land one or two.

If you’ve played the earlier games in this series then you’ll know the score by now; it’s more of the same but it’s high quality stuff and maybe you really do want to know what happens at the end of this story.