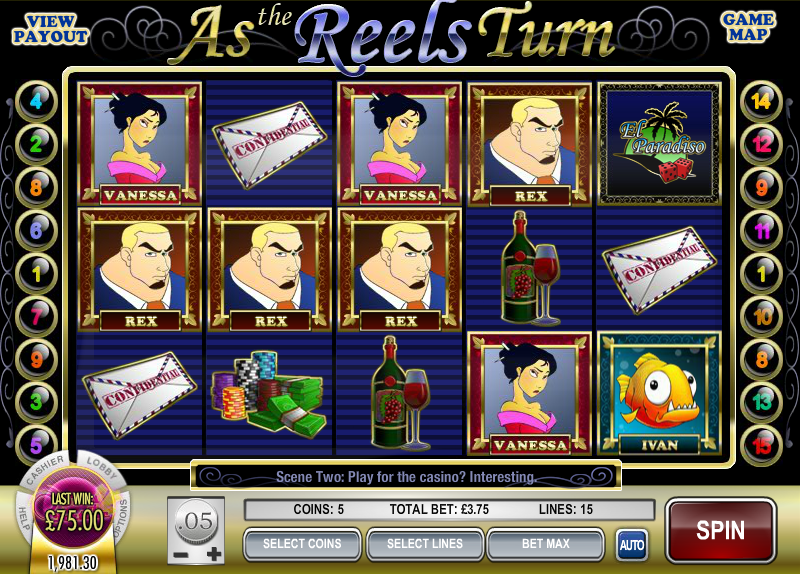 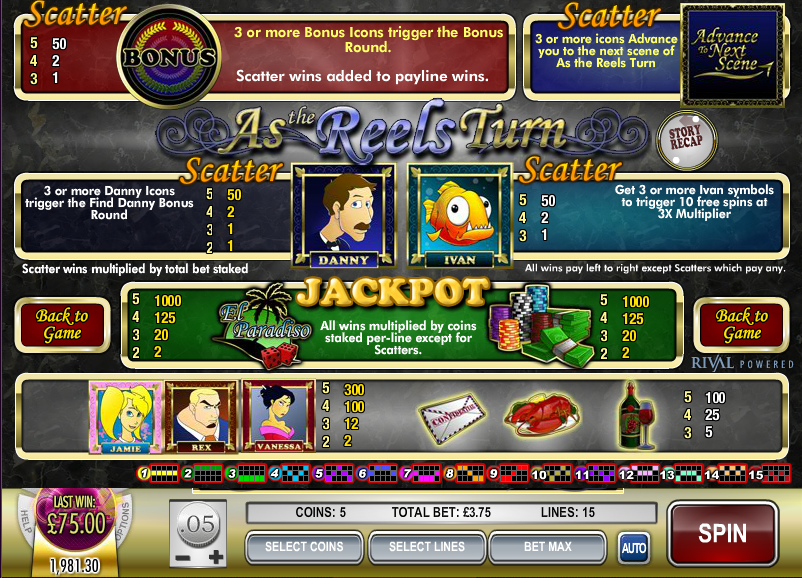 If you like playing online slots with a soap opera-stlye narrative then the ‘As The Reels Turn’ series of games is probably as good as it gets. There are three games in total and this is the second part, subtitled ‘The Gamble’. The story picks up from the original to tell the tale of the various characters involved in the El Paradiso club.

As The Reels Turn 2 is a five reel slot with fifteen paylines and it’s one of Rival Gaming’s i-Slot range which means a more immersive experience for the player. The symbols are largely similar to the first game and include wine, lobsters, a confidential letter, Jamie, Rex and Vanessa. The most valuable symbol is once again the El Paradiso logo.

There are four scatter symbols – Bonus, ‘Advance Next Scene’, Danny and Ivan – each with their own bonus game attached.

Just as in the first game, three or more bonus symbols will kick this round off and what you need to do is help Matt G. locate fake chips. Just click on them, collecting prizes until you find the counterfeit one.

This is the way to progress the storyline and you do it by landing three or more of the Advance To Next Scene symbols anywhere in view. As you can see from the video above you will now see a cut scene which moves the story along and if you click the ‘Game Map’ button you can check your progress. Several of the scenes include bonus games as follows:

Three or more Danny symbols on the reels will trigger this game and all you have to do is pick which one of Danny’s characters the audience would prefer. You’ll get a bigger prize for the more popular characters.

Ivan The Fish Bonus Round

Ten free spins are available here if you can land three or more of the Ivan symbols anywhere on the reels. All wins will be multiplied by 3x.

If you want to continue your interest in these characters then this is the game to play; the gameplay is identical to the first game but it’s a high quality release so well worth checking out.