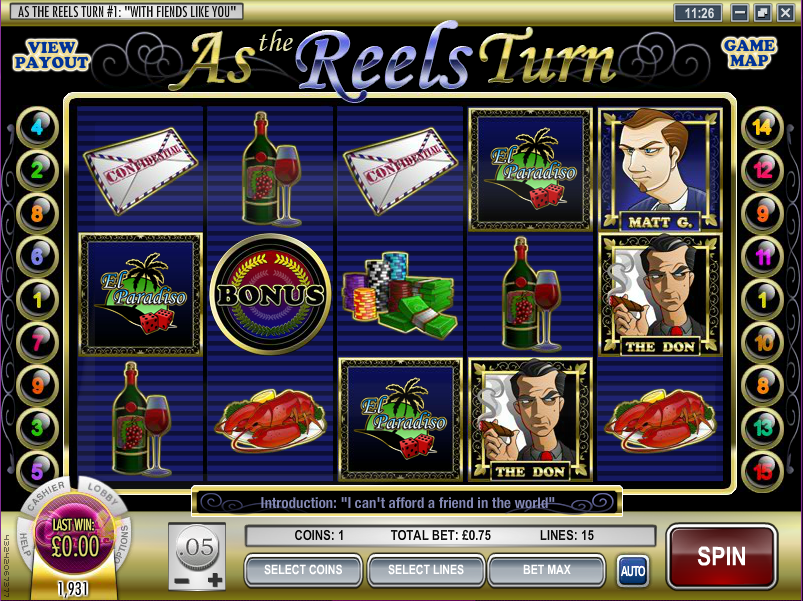 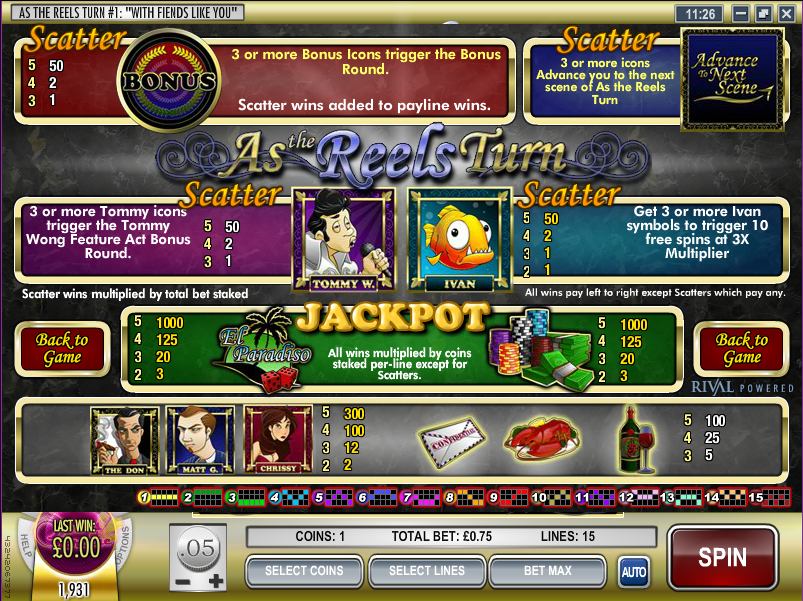 Rival Gaming really go to town with the story lines behind their i-Slots releases and As The Reels Turn is one of the most involved; it plays out as part of a soap opera and it’s just the first part of a trilogy of online slots featuring the same locations and characters. It’s well worth reading the introductory blurb when you first load up the game – at least if you want understand what’s going on.

As The Reels Turn is subtitled “With Fiends Like You” and it’s a five reel and fifteen payline slot. The story concerns the various characters who inhabit and frequent the El Paradiso club. The main symbols are a bottles of wine, a lobster, a ‘confidential’ letter, Chrissy, Matt G. and The Don. The El Paradiso logo is the jackpot symbol.

There are four scatter symbols for four different features – Ivan the fish, Tommy W., ‘Advance Next Scene’ and a Bonus icon.

Three, four or five of the bonus scatter symbols will kick this round off and all you have to is advise Matt G. as he searches for fake casino chips. Just pick from the chips on display until you find the fake; each real chip will win you a prize as you can see from the video above.

If you click the ‘Game Map’ button in the top right hand corner you will be able to see your progression along the story arc; every time you can land three or more of the ‘Advance To Next Scene’ symbols anywhere on the reels you will move along the narrative.

On the map the green ‘BR’ also indicates an extra bonus round to be played at that point:

Land three or more of the Tommy Wong symbols anywhere on the reels to play this game; Tommy plays several characters and you must pick the one you think the audience would prefer. The more they like it the more you win.

Ivan The Fish Bonus Round

Ten free spins are available here if you can land three of more Ivan The Fish scatters anywhere on the reels. All wins will be subject to a 3x multiplier.

If you like to immerse yourself in the storyline of a slot machines then this is clearly the game for you; the evolving plot makes you want to keep playing and there’s loads of bonus features to keep things interesting. Well worth checking out.