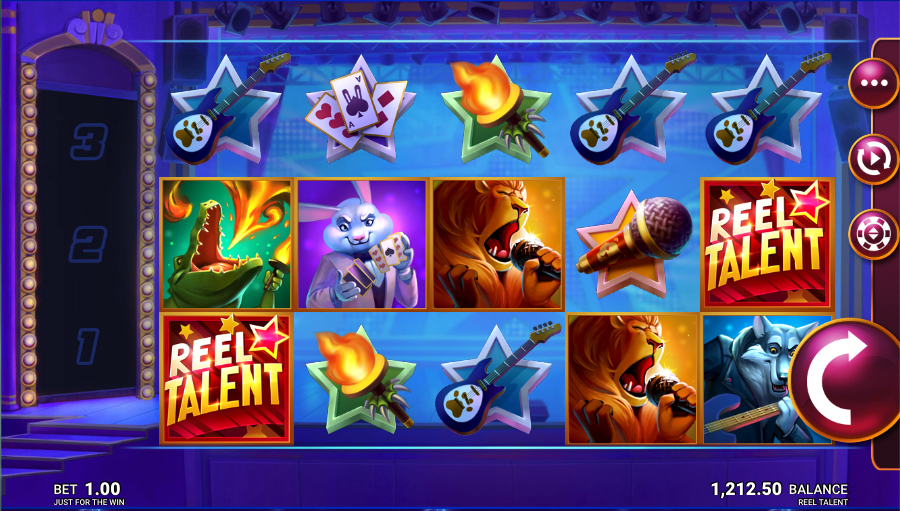 The world of the talent show is the theme of this online slot from Just For The Win but this is a competition for animals rather than humans; the game is called Reel Talent and it combines some fast-ving action with some clever bonus features.

Reel Talent is a five reel slot with three rows and twenty fixed paylines; tense music accompanies your gameplay on a set of reels which of reels in Tv studio environment with a meter on the left hand side (which we shall explain shortly).

The high value symbols are the Reel Talent logo along with some of the acts – the singing lion, the fire-breathing alligator, the wolf guitarist and the rabbit magician; lower values include the microphone, the torch, the guitar and the pack of cards.

The wild is a big, gold ‘Wild’ which will substitute for all others to help form winning combinations.

Reel Talent revolves around this base game feature in which the symbol in a winning payline is moved to one of the three slots on the left hand side (Symbol Storage). These slots must be filled in consecutive free spins or with three separate winning paylines in one or two spins otherwise the symbol area will empty out.

When the meter is full you’ll receive a Superspin the type of which will depend on the symbols in the meter:

The Superspin includes only those symbols on the meter so you should earn a bigger win on Stage 2 than Stage 1 and even bigger on Stage 3 (which in fact guarantees a win).

Reel Talent is a slot which utilises a clever bonus mechanism to make you want to keep spinning the reels; that’s Ok though because it’s a lot of fun with some top notch animations and sound effects.