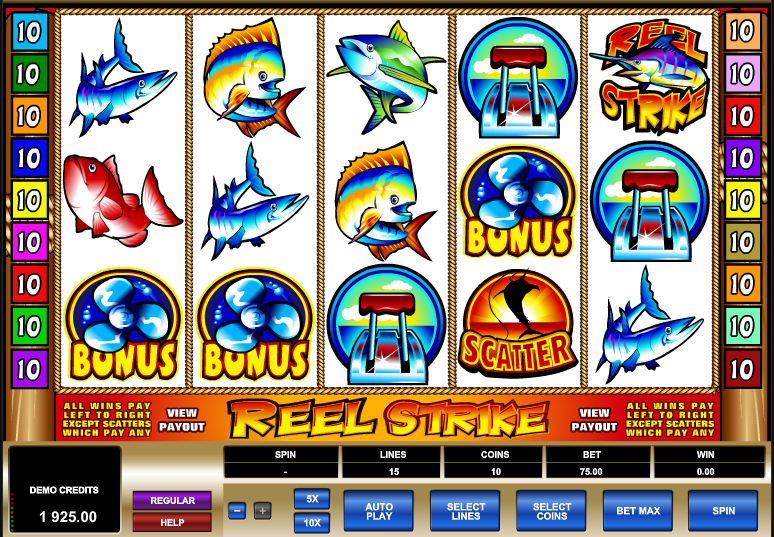 While it’s debatable as to whether fishing could be described as a real sport as such, deep sea fishing does offer a little more adventure than an afternoon sitting on a riverbank.  Reel Strike from Microgaming is an online slot machine which aims to tap into a bit of that danger by taking us on to the ocean waves for a shot at landing some big fish and some bigger prizes.

Five reels and a mere fifteen paylines make up the bones of this slot and the first thing you’ll notice is the watery soundtrack which makes a decent effort of recreating a nautical atmosphere.  A selection of engaging-looking fish are the lower value symbols – we can recognise a shark and a flying fish but that’s where our fishy knowledge ends.  Other symbols include a the fishing boat, the throttle control and the game’s logo.

The fishing rod reel wild gets a mention here because it can substitute for the bonus symbol, which is unusual.  This means that the bonus feature can be triggered by a combo including wilds.  Five wilds will not trigger the bonus but you won’t care, having just won 10,000 coins.

There’s a relatively standard free spins feature available in this game and it’s triggered by landing five of the propellor bonus symbols on an active payline.

You must first choose one of six boats which will determine the number of spins between 2 and 7 and then another boat which will allocate you a multiplier between 1x and 7x.

The feature can’t be re-triggered from within the free spins.

The bonus symbols is not a scatter which means you’ll have more chance of landing the feature win the more lines you play – go for all fifteen.

This is pretty run-of-the-mill slot which does look a little dated now but the speed at which it clips along  means it remains quite popular.  We like the watery sound effects!