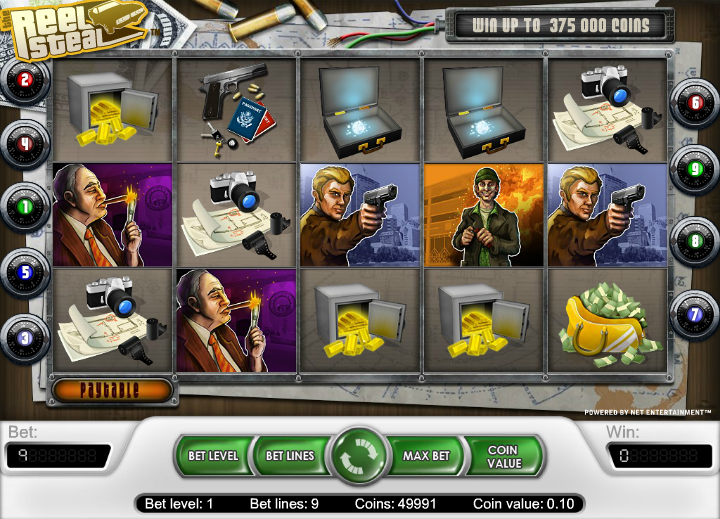 Any online slot machine based on the 1970s is OK by us and the more loyal to the genre the better; Reel Steal is one of the best examples of period gaming we’ve played and it’s a throwback to those American cop shows of that decade.  Think of Starsky and Hutch and Kojak and you’ll be in the right ballpark.

Reel Steal is a Net Entertainment slot and it’s played out over a maximum of nine paylines and five reels; the subject is actually criminals rather than cops but the background music is more reminiscent of the good guys.

All the symbols are related to a heist and the participants and so we have a gun, a camera and blueprints, a suitcase containing a diamond, a bag of banknotes and a safe full of gold bars.  Five dodgy-looking characters are the more valuable symbols and of course there’s the obligatory foxy chick in the mix.

The wild symbol is a classic seventies car with a yellow point job and the scatter is represented by several sticks of dynamite.

Sometimes the wilds are a little more valuable than at other times and that’s certainly the case with this game.  During the base game any winning paylines which contain a wild will be worth a multiplier of 5x; in the feature a win will be multiplied by 25x!

Landing three, four or five of the dynamite scatter symbols will reward you with fifteen, twenty or twenty five free spins respectively. Any wins you land in this feature will be subject to a 5x multiplier but, as we stated above, including a wild in a winning line will make it worth 25x.

Each time you land another scatter during this round it will add one more free spin to the total.

Play with maximum paylines but more importantly, turn the volume up on your device to get the full effect of the funky 70s soundtrack.

The subject matter and the brilliant soundtrack lift this slot above the norm and the generous free spins feature is the icing on the cake. We like it.