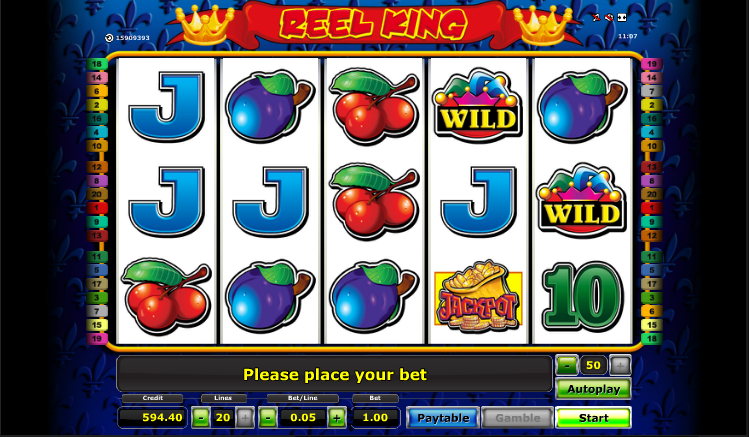 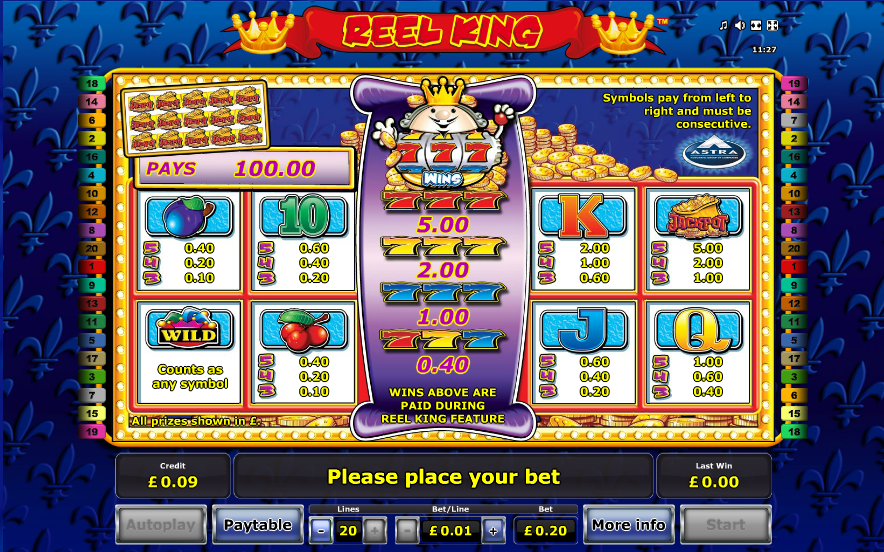 Novomatic online slots tend to follow a familiar pattern but that’s no bad thing; Reel King is another addition to their catalogue and at first glance it’s a game which gets right back to basics.  Classic slots and fruit machine fans will be completely familiar with the range of symbols featured here but this game adds one or two extras which mean it’s more than just a basic slot.

Reel King is a five reel and twenty payline slot which looks like an expanded three reel machine; some of the main symbols are lifted straight from the one-armed bandits and  include cherries and plums but there’s also a bag of gold jackpot. 10, J, Q and K make up the lower value symbols.

This game also contains a couple of bonus features which marks it out from more basic machines and there’s a wild symbol which substitutes for anything else on reels three, four and five and a Reel King symbol which will pop up randomly after a spin.

You don’t need to do anything to trigger this feature, it can just occur randomly after any winning or non-winning spin.

One or more of the reels will turn into a little King-shaped one-armed bandit with only sevens on the reels.  Press ‘Start’ to spin the reels and every spin will result in a win until you land one of litre black diamonds – then it’s game over.

You can also use the Autoplay button here which saves a bit of clicking on your behalf.

We recommend playing with as many paylines as possible; because the wilds only appear on reels three, four and five we think you’ll have more chance of getting them to do something useful with more active lines in play.

Most Novomatic slots are strangely addictive and this one is no exception; perhaps it’s the simplicity of the game or the smoothness of the animation but this is definitely one to recommend.