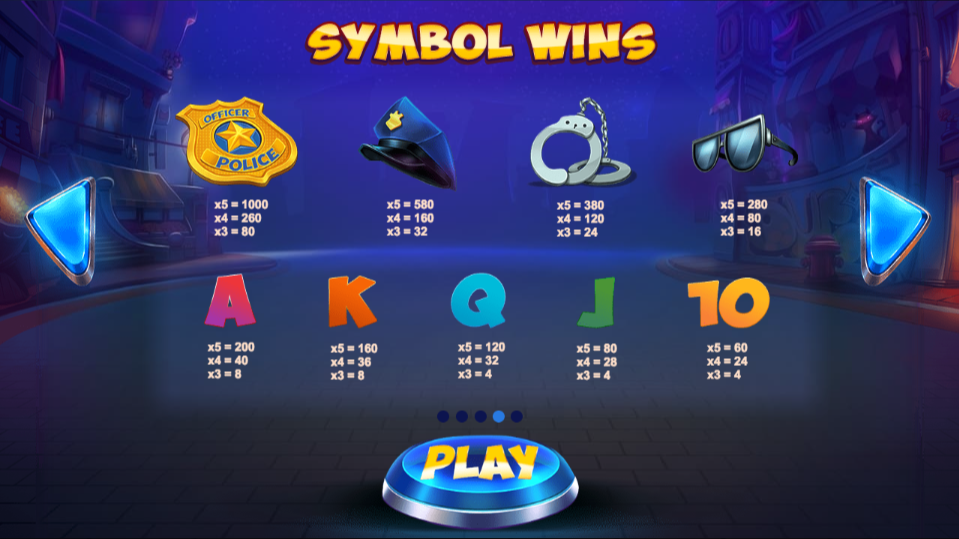 While we probably shouldn’t try to glamourise the grubby world of crime it’s fair to say that a number of online slots do in fact feature criminals of various hues going about their illegal business; Reel Heist is one more to add to the list, it’s developed by Red Tiger Gaming and it comes with a clever bonus feature which sees a cop chasing a robber around the reels – read on for more details.

Reel Heist is a five reel slot with four rows and forty fixed paylines; the very un-mean streets of a colourful town form the backdrop to those reels while Red Tiger’s familiar progressive jackpot totals can be seen incrementing slowly on the left hand side.

The higher value symbols include a gold police badge, a police cap, a pair of handcuffs and a pair of sunglasses; 10, J, Q, K and A make up the lower values.

The policeman is wild and he emerges onto the reels from a particular direction rather than occupying a position in the spin; he will replace all others to help form winning combinations. Once on the reels he will move around in various directions on each spin until he drops off the edge.

You already know that the policeman can appear on the reels from anywhere, well so can the criminal and when he does he’ll be carrying a multiplier value of between 7x and 2000x. Ideally you will see the cop throw his baton at the robber which will stun him, he’ll then catch up with him in subsequent spins and earn you the multiplier value applied to your total stake.

Reel Heist is an unusual slot in that the bonus feature is largely independent from the reel spins but that’s Ok – you’ll see plenty of cop and robber action even if actually catching the bad guy is a little trickier. Overall it’s a fun game with a tasty progressive jackpot prize and an RTP of exactly 96.00%.