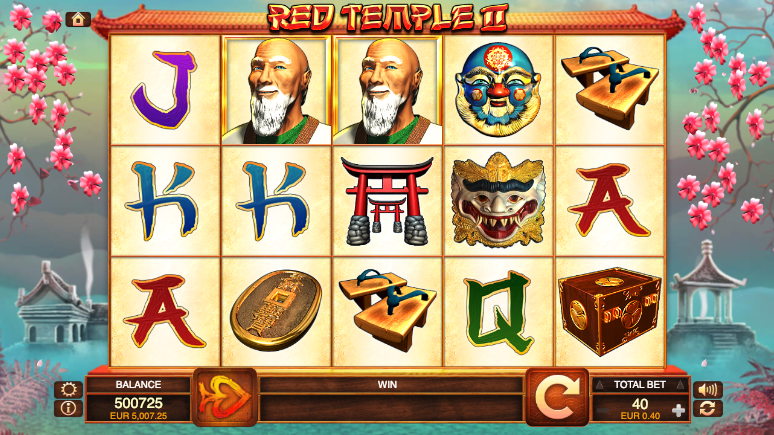 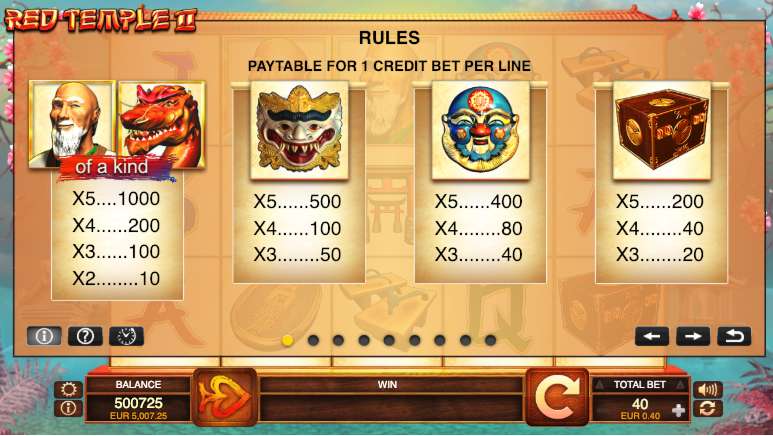 Cherry blossom, dragons and temples can mean only one thing – it’s time to play an online slot direct from the Far East and this time it’s Red Temple 2, a release from Fuga Gaming which offers numerous bonus features and repeating free spins.

Red Temple 2 is a five reel slot with three rows and up to forty paylines; those reels spin on a papery surface on the side of traditional Chinese building while cherry blossom falls gently from trees on either side. In the background smoke drifts from temple chimneys in a windless sky.

All the high value symbols are related to the theme and include the old man, the dragon, the two masks, the ornate box, the coin, the gate and the clogs; J, Q, K and A make up the lower values.

The swords are the wild symbol, they appear on reels one, three and five and they’ll help to create winning combos by replacing all symbols except the old man, the dragon, the bonus and the Free Games icons. When the wild is on the bottom row it will expand to fill the whole reel.

Any winning combo with two, three or four symbols in the base game will freeze in place and the next reel will respin; a matching symbol on that reel will award another respin of the following reel.

This is triggered by landing three of the Free Games symbols anywhere on reels two, three and four; as you can see from the video above you’ll now get to hit one of the gongs which appear to reveal the number of spins (3-7), possible win multipliers or locked wilds/symbols.

When the spins finish you’ll get another go at the gongs to add more spins or end the round.

Trigger this by landing three of the bonus symbols anywhere on reels two, three and four; this is a picking round in which you get to select objects from two levels until you move up to the third level; here you get one more pick to win a big cash prize, a multiplier for your wins or an end to the round.

Red Temple 2 is a slot with some very intricate and delicate graphics and animations; the Streak Feature means that there’s always something interesting happening on the reels. You can play with 10/20/40 paylines and the RTP increases slightly the more lines you use.