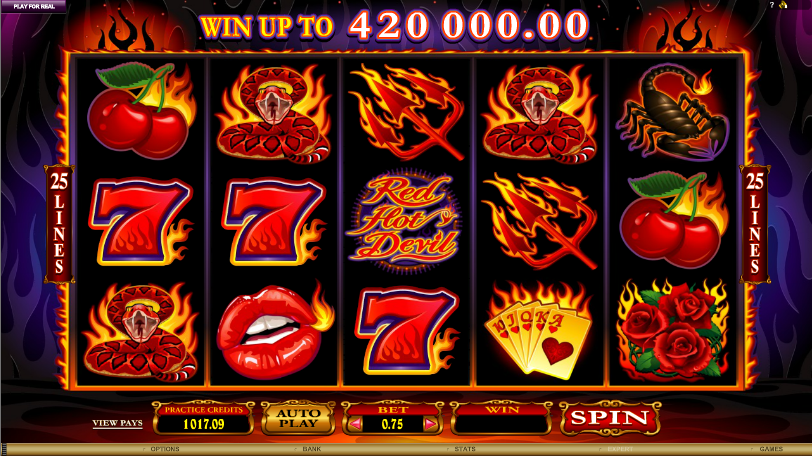 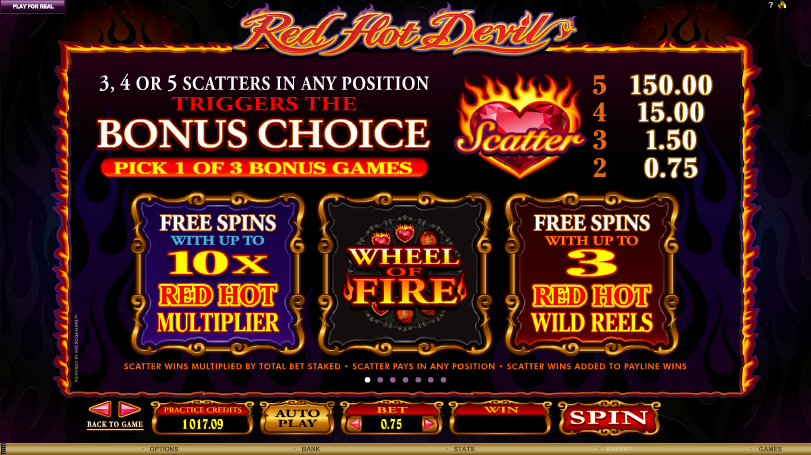 Brand new from Microgaming comes this fiery online slot direct from the underworld. It’s called Red Hot Devil and there’s a certain double meaning in the title – not only is everything wreathed in flame but also the main female character is the ‘hot’ devil in question. This game features several bonus games so keep reading to find out more.

Red Hot Devil plays out over five reels and twenty five fixed paylines and those reels are set against a backdrop of what we assume is vision of hell as imagined by Microgaming. Silhouetted flames emit heat above the screen.

All the symbols are hell-related or at least they are all on fire; they include cherries, dice, a scorpion, a snake, a trident, roses, playing cards, sevens, lips and the she-devil herself.

The ‘Red Hot Devil’ logo is wild and appears on reel two, three and four; the scatter symbol is a burning heart-shaped gem which activates the main feature.

The bonus feature is triggered by landing three or more of the scatter symbols anywhere in view and when you manage that you will offered the choice of three different features:

You will receive ten spins and each time you land a scatter symbol on reels one or five the multiplier will increase. The multiplier always begins at 1x but increases at different levels depending on how many scatters triggered the bonus:

Landing scatters on reels one and five will award ten more free spins.

You will be taken to a screen displaying ten fiery orbs and all you have to do is pick them to reveal prizes until you find the jester symbol at which point the game is over. The other symbols are hearts which reveal a prize and let you pick again; one of the hearts is also a bonus multiplier.

If you trigger this round with 3 or 4 scatters there’s a total multiplier of 2x, trigger it with 5 and receive a 3x multiplier.

You will receive ten spins and on each spin reel two, three or four will turn completely wild. If you land a scatter on reels one or five then those reel will also turn wild. A scatter on both will turn both reels wild and award ten more free spins.

The nay choice here is which bonus to pick; we’ve had the best results with the Wheel Of Fire but it’s also more fun to watch those free spins. As ever, the choice is yours.

This is a good-looking slot with an appropriately rocky soundtrack and a nice choice of bonus features, although they are a little hard to trigger. That’s understandable from a reasonably high variance slot.