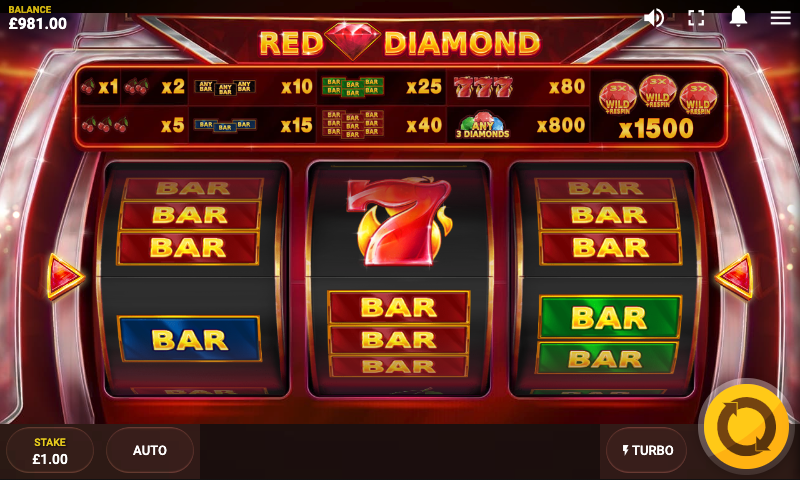 If simplicity is a virtue then a three reel slot machine is the physical manifestation of that attribute; Red Diamond is a game which definitely belongs to that group, it’s developed by Red Tiger Gaming and while it caters mainly to the purists there are some extra features to keep things interesting.

Red Diamond is a three reel slot with three rows and just the one payline; we’re playing on a replica of a physical machine with gleaming silver casing and a dark red inlay to create the Vegas atmosphere.

All the symbols and their respective values are shown above the reels and include red sevens, single/double/triple bars and cherries. Cherries will pay out 1x your stake for just one on the payline and the bars will pay 2x even if they’re mixed.

The wild can appear as a red, blue or emerald diamond with a multiplier attached and they’ll substitute for any standard symbol to help form winning combinations.

This is the only extra feature in Red Diamond and it’ll be triggered whenever at least one of the wild diamonds lands anywhere on the payline; as well as acting as a wild they’ll also award the following:

The red diamond is obviously the best but any three matching wilds on the payline is a winner.

Red Diamond is a simple but sophisticated slot with some good looks and a bonus feature which hits quite regularly. Even if three reel slots aren’t your thing this is worth a few spins.