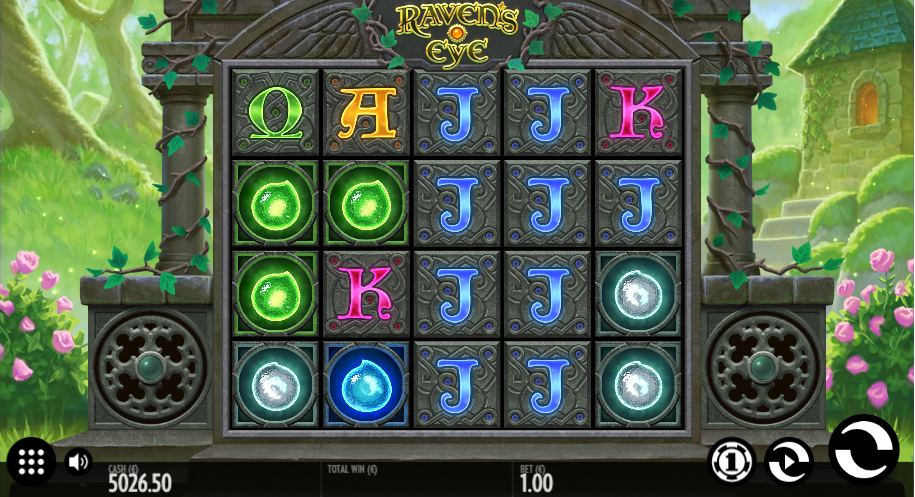 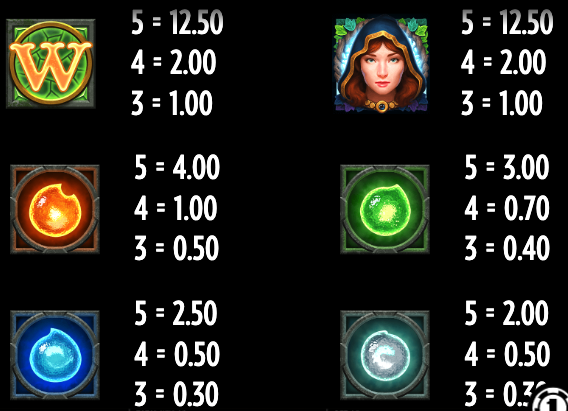 It’s time to journey into a fantasy land where the druid and her raven work together to provide players with free spins and mystery symbols; this is Raven’s Eye, an online slot from Thunderkick with magic at its heart.

Raven’s Eye is a five reel slot with four rows and thirty fixed paylines; those reels spin on an ornate stone structure in front of a backdrop of ancient trees, moss-covered buildings and pink roses.

The higher value symbols include the druid and four orbs in orange, green, blue and white; 10, J, Q, K and A represent the lower values.

The big, orange ‘W’ is wild and it will replace all standard symbols to help form winning combos; the raven is the bonus symbol and key to the two features.

The raven can appear stacked on any reel and when it appears it will transform into matching symbols with the potential to help out with some bigger wins.

This is triggered by landing raven symbols on at least three different reels and after the usual transformation you’ll be awarded fifteen free spins; each raven landing during this round will provide an orb which fills up the meter on the left hand side – when the meter is full you’ll receive an extra three spins plus the symbol shown above will become a transforming raven also (but it won’t give out any orbs). Watch our gameplay video to see how this all plays out.

Raven’s Eye is a very playable slot with a clever bonus feature which seems to be quite profitable when triggered; there’s also a delicate, fantasy soundtrack which fits the theme perfectly.