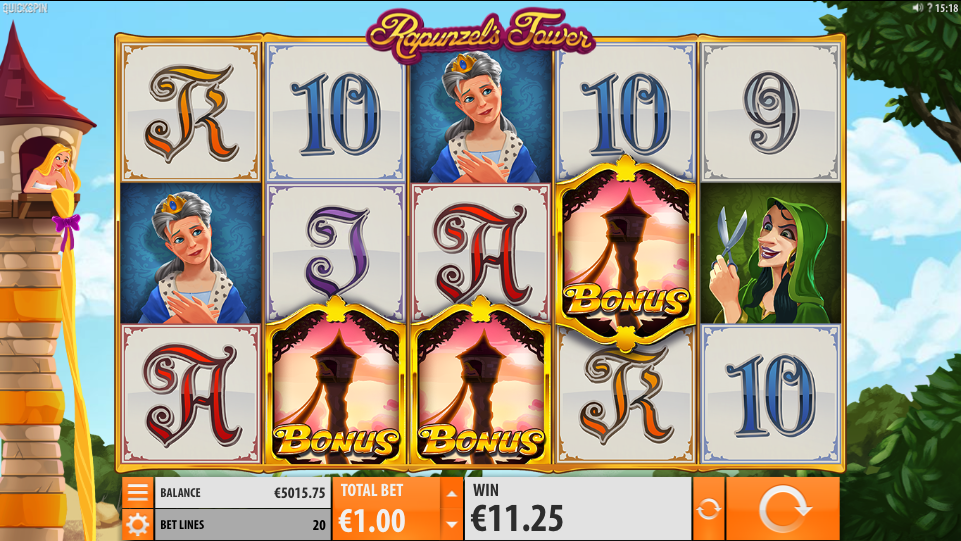 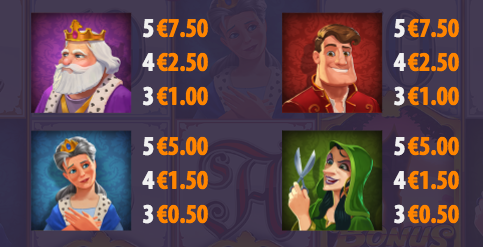 Children’s fairy tales are a great fit for the theme of an online slot machine; there are a wide variety of colourful characters to act as the symbols and a gripping moral narrative to serve as the background.  Quickspin’s updated 2017 offering of Rapunzel’s Tower is just as good as any fairytale-themed slot we’ve played before (it was first released in 2013 ) and has one of the best bonus games.  It tells the story of a princess locked in a tower by a wicked witch who grows her hair to such a length that a prince is able to rescue her.

Rapunzel is a five reel and twenty payline slot which may not feature state of the art graphics but everything about the game is playable and enticing; the art is in fact reminiscent of of a child’s storybook and in the background we can see Rapunzel in her tower with her long hair.

Rapunzel uses standard playing card symbols so the lower values are 9, 10, J, Q, K and A; the higher value symbols are the Prince, the Wicked Witch (Dame Gothel) and a King and Queen.  Rapunzel herself features on the two wild cards, one featuring her hair and one featuring her face and there’s a tower symbol which triggers the bonus game.

The wilds with Rapunzel’s hair appear on reels two, three and four and when they do they’ll remain in place, awarding free respins until a win occurs.

The best part of the game is Rapunzel’s Tower game and you can trigger this by landing three tower symbols anywhere on the reels in one spin.  The bonus game starts and the player is awarded ten free spins with the object of winning money and helping the prince climb up the tower.  We move one step up the tower each time a Rapunzel’s hair symbol is landed with the aim of reaching the top of the tower.  More free spins are awarded in random positions as you climb up and if you make it to the top you’ll get a 2x multiplier.

Rapunzel’s Tower is a great slot with a really creative bonus game – we like this a lot and it’s one we come back to regularly. It comes with an RTP of 96.25%.