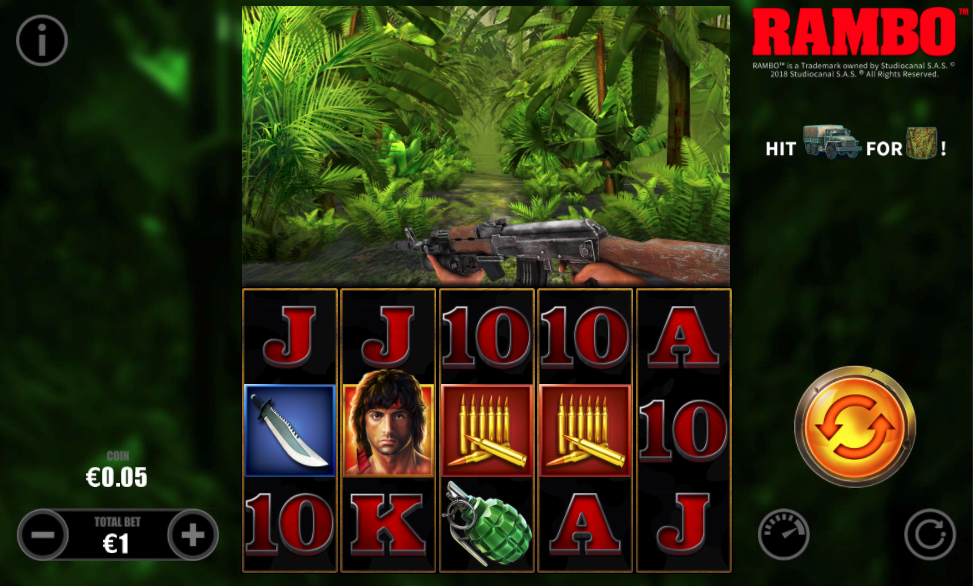 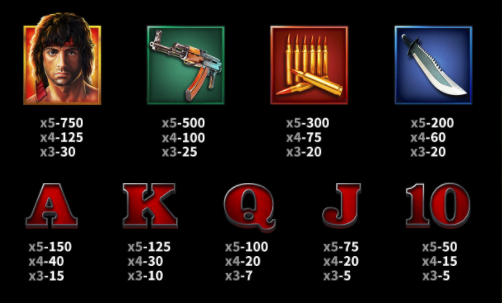 Action hero of five ultra-violent movies, John Rambo is the Vietnam veteran who can’t quite seem to settle down; he’s also the inspiration behind this clever online slot from Skywind which includes a split-screen feature and several themed bonus games.

Rambo is a five reel slot with three rows and twenty fixed paylines and the obvious thing to say when loading up this game is that there’s a ‘first person’ video game view above those reels in which Rambo moves through the forest, occasionally encountering things which can trigger bonus features.

High value symbols include Rambo, his machine gun, some bullets and a huge knife; 10, J, Q, K and A make up the lower values. The grenade is wild and it will replace everything else except the gold badge to help form winning combinations.

The following features are related to Rambo’s wander through the woods above the reels and they’re triggered when he destroys a particular piece of equipment or structure:

If Rambo comes across a helicopter on his walk through the woods then you’ll receive five free spins and on each spin three targets will appear somewhere on the reels; if a helicopter symbol appears on a target it will be shot by missiles with each hit awarding 2x, 3x or 4x the stake – if it explodes you’ll receive up to 50x the stake.

Landing three of the gold star bonus symbols anywhere on reels two, three and four will award ten free spins and this time Rambo has reached a desert compound – he’ll shoot things as the spins progress to win sticky wilds or an RPG which may destroy helicopters on the following spin. Destroying a helicopter will award ten more spins.

The first person view above the reels seems like quite an obvious feature but it’s not one we’ve seen before and it complements the gameplay and theme perfectly; Rambo is a great slot to play and a fitting tribute to Sylvester Stallone’s tortured warrior.