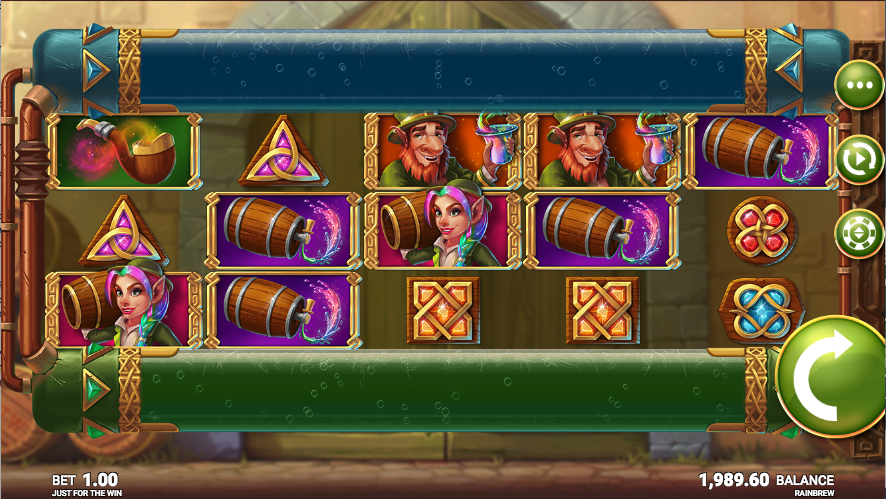 Almost certainly unfairly, Ireland is largely associated with alcohol and mystical rainbows; combine those two things and you have Rainbrew, an online slot machine from Just For The Win with some interesting gameplay, the Side Winder and tasty free spins – keep reading to find out more.

Rainbrew is a five reel slot with three rows and two hundred and forty three paylines in the base game; those reels are spinning on the side of some sort of magical brewing device which produces this colourful drink. Above and below the reels are the Side Winder tubes which we’ll explain a bit further down.

There are five high value symbols and they include the male and female leprechauns, a barrel of booze, a cup of the good stuff and a pipe; five Celtic designs in red, purple, orange, blue and green make up the lower values.

There are three types of wild – Regular, Top and Bottom – and they perform the usual substitution functions but they also have a role to play in one of the features explained in more detail below. They won’t replace the Rainbrew bonus symbol though.

The extra rows means that if both tubes are active, the number of paylines increases to 1125.

This is triggered by landing the required number of Rainbrew bonus symbols anywhere on the reels:

During this round the Rainbrew and regular wild symbols appear only on the Side Winder tubes; regular wilds in matching positions on both will transform the reel in between completely wild. Each Rainbrew will award an extra free spin. Both tubes are in play during the free spins feature.

Just For The Win produce some very innovative slots and Rainbrew is another to add to that number; the graphics are great, the background music is appropriate and unobtrusive and the Side Winder feature introduces something we’ve not seen before. Check it out – it comes with an RTP of 96.02%.