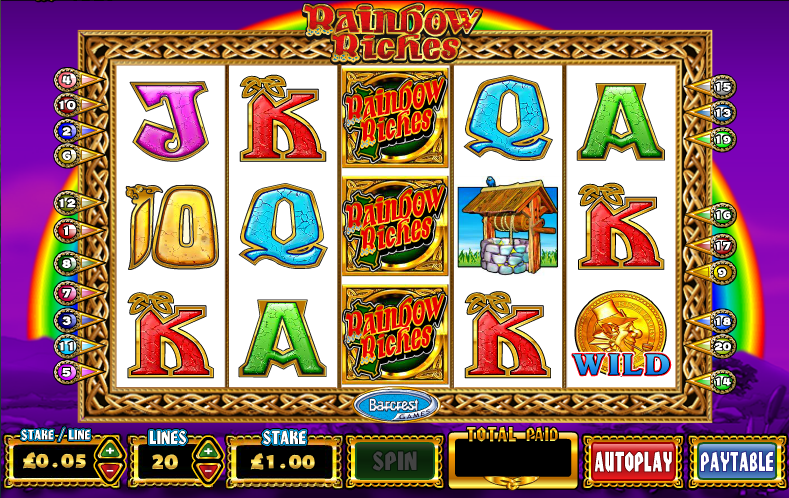 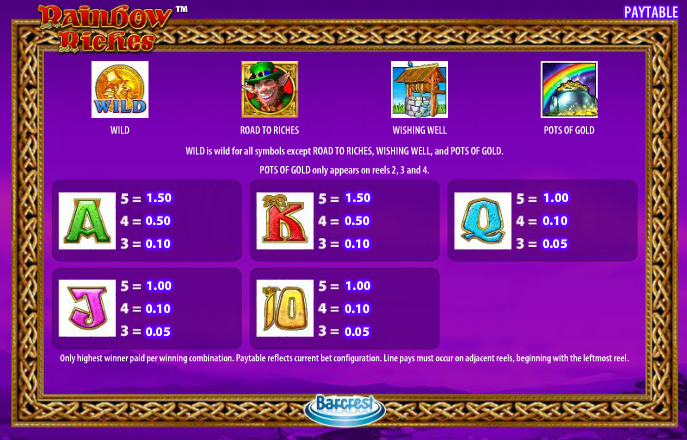 There are some genres of online slots which may seem narrow but which actually contain a surprising number of games; one example of that is what you might call the Irish legends theme.  We’ve reviewed more than a few of these games in the past and they all tend to contain leprechauns, rainbows, pots of gold and a fair chunk of humour.

Rainbow Riches is a slot from Barcrest, a company well known in pubs and chip shops around the UK for it’s physical fruit machines; it’s now part of a larger organisation called SG Gaming but the online slots still retain the Barcrest moniker.

Rainbow Riches features five reels and twenty paylines and although it’s very much an online slot, it does retain one or two fruit machine-style elements within the bonus games.  As we’ve already mentioned it’s Irish themed and therefore we have bonus symbols which include a leprechaun, a wishing well and a pot of gold under a rainbow – there’s also a gold coin wild.  Standard symbols are 10, J, Q, K and A plus the Rainbow Riches logo.

Rainbow Riches is a slot for those who like bonus features; it contains three bonus games as follows:

This is a fruit machine-style feature and to trigger it you’ll have to land three of the Leprechaun scatter symbols anywhere on the reels.  You’ll be whisked to a screen showing a path full of increasingly valuable multipliers alongside a wheel of fortune.

Click ‘Spin’ to start the wheel spinning and it will land on a number between one and six or ‘Collect’.  A number will move you on that number of places and let you spin again.  Spinning ‘collect’ will end the feature.  The multiplier on which you finish will be applied to your total stake.

Landing three or more Wishing Wells on the screen will trigger this feature; just choose one of the wells which triggered the bonus and it will reveal a multiplier which will be applied to your total stake.

Three Pots of Gold on reels two, three and four will activate this bonus game; a leprechaun is standing on a rock in a field and around his head are spinning twelve pots of various values.  The one that stops at the bottom of the screen above the arrow is your prize and again it’s a multiplier which is applied to your total stake.

Rainbow Riches is a phenomenally popular slot and it’s easy to see why; the music is magical, the game is colourful and the three bonus features get triggered regularly.  Try it and find out why so many people love it.