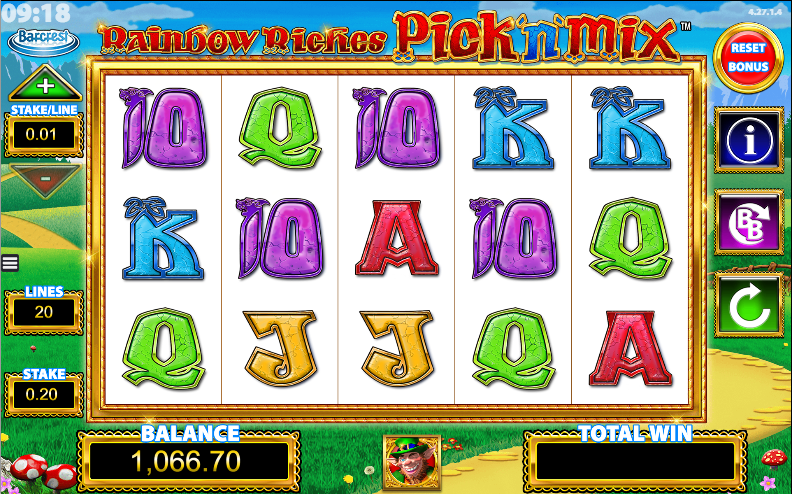 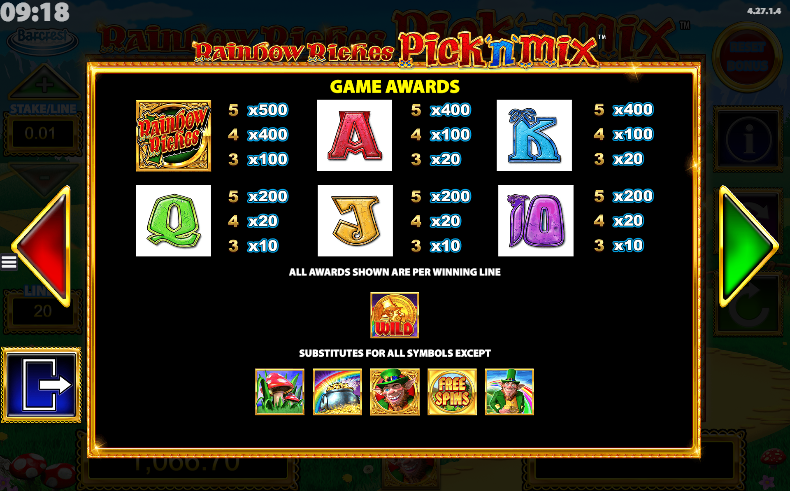 If you’ve enjoyed playing Rainbow Riches in the past then you’ll be pleased to hear that there is now sequel to that Irish-themed online slot which adds a range of new features to the gameplay. It’s called Rainbow Riches Pick ‘N’ Mix, it’s developed by Barcrest of course and it’s all described in intricate detail below.

Rainbow Riches Pick ‘N’ Mix is a five reel slot with three rows and twenty fixed paylines; the design of the game is similar to the original with gold-framed reels in front of a green and pleasant Irish landscape, although the mountains in the distance look a bit out of place.

There are very few base game symbols, in fact just the Rainbow Riches logo and then the standard 10, J, Q, K and A. The wild symbol is a big gold coin and it substitutes for everything except the bonus symbols – these ares selectable before the game starts and are explained in more detail below.

When the game starts you are asked to select up to three of five possible bonuses; the fewer you pick, the more chance there is of that particular feature triggering. When you’ve started playing you can always use the ‘Reset Bonus’ button to re-pick.

The bonus symbols are shown below and each feature is triggered by either three or four scattered of the specified symbol shown below, except the frees spins which also triggers for five. Landing five of the former four will pay out 500x your line bet.

If you really want to play the bonus games then the quickest way is to play the Big Bet by clicking the purple button on the right hand side. This costs extra and you will be taken to a screen displaying up to three wheels – one for each of your selected bonuses.

Rainbow Riches Pick ‘N’ Mix is perhaps bordering on having too many bonus features which is something we wouldn’t normally say; it’s good fun though and an appropriate sequel to the original.