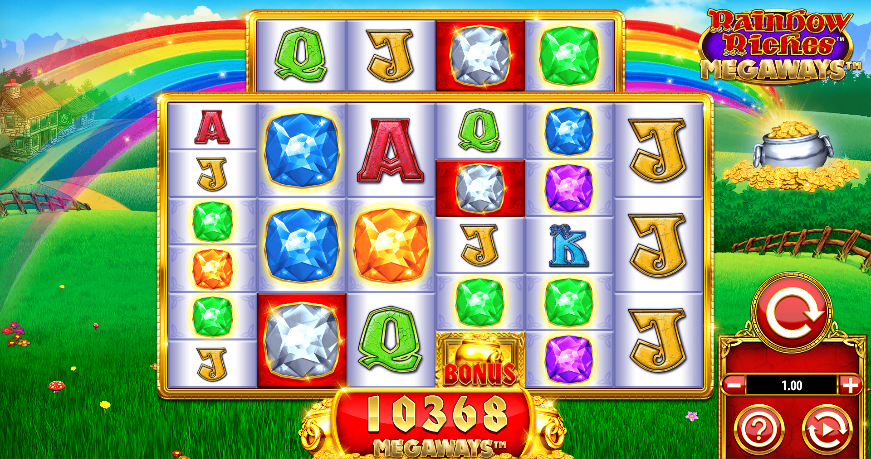 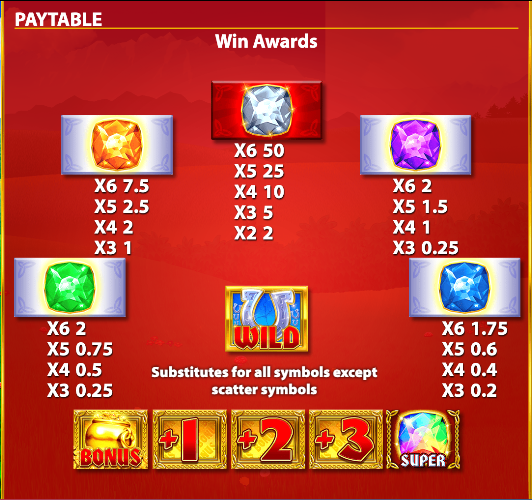 It had to happen eventually so here we bring you the technological collision between Barcrest’s Rainbow Riches series of online slots and Big Time Gaming’s Megaways payline structure; there are no prizes for guessing it’s called Rainbow Riches Megaways and you can read all about it below.

Rainbow Riches Megaways is a six reel slot with six/seven rows and a potential 117640 ways to win; that hge number is made possible becasue there can be up to seven rows on reels one and six, six rows on reels two to five and then the horizontal reel at the top to add to the fun. The Irish theme is well demonstrated with rainbows, pots of gold and rural greenery in the background.

The higher value symbols are five gems in green, orange, white, purple and blue while 10, J, Q, K and A make up the lower values; the wild is a silver horseshoe which will replace all standard symbols and the pot of gold is the scatter. The Super Gem is multicoloured.

Rainbow Riches Megaways uses cascading reels in which the symbols in each winning combo will disappear to be replaced by more falling in from above – more wins can then be formed and the process continues.

The multicoloured Super Gem only appears on the horizontal reel but when it does all other gems in view will transform into matching ones for a chance of a bigger win.

This is triggered by landing at least four pots of gold anywhere in view for which you will receive twelve free spins although each additional pot there’s an extra five spins. Each succesful cascade will increase the win multiplier by 1x with no upper limit and landing the golden +1, +2 or +3 symbols on the top reel will award that number of extra free spins.

Rainbow Riches Megaways is a succesful marriage between one of the most popular and enduring series of online slots and Megaways which is bringing an inventive streak to paylines all over this industry. Highly recommended!