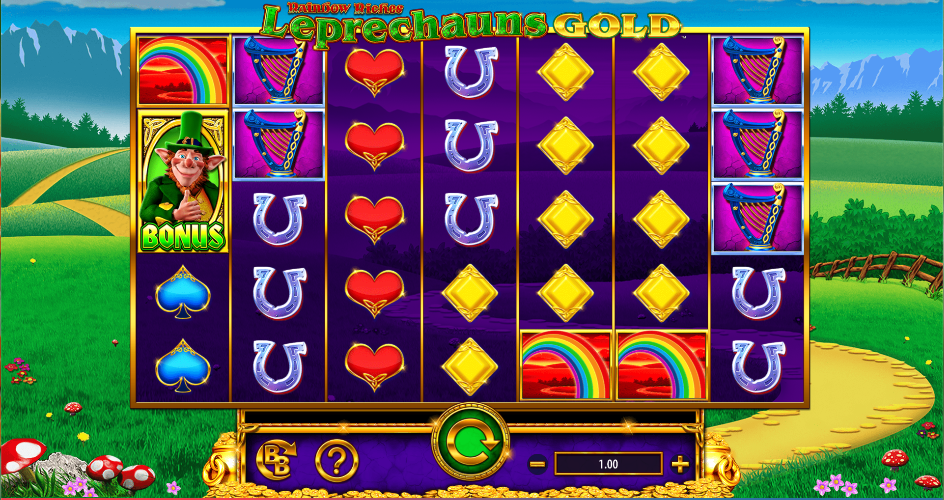 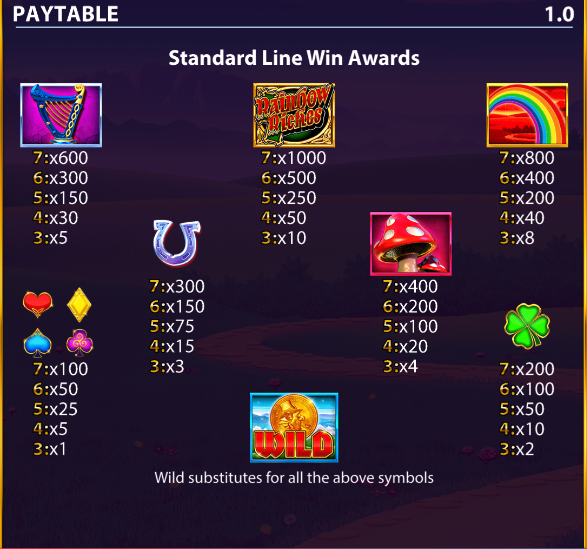 Book yourself a ferry across the Irish Sea because we are once again heading over to the Emerald Isle to check out an online slot full of pots of gold, four leaf clovers and the like; this is Rainbow Riches Leprechaun’s Gold, it’s developed by Barcrest and it comes with their Big Bet wagering option.

Rainbow Riches Leprechaun’s Gold is a seven reel slot with five rows and fifty fixed paylines; bordered with gold, those reels stand against a rural, sunny backdrop with lofty mountains in the distance.

There are some familiar symbols here including the Rainbow Riches logo, the harp, a rainbow, a horseshoe, a toadstool and a four leaf clover; playing card symbols make up the lower values.

The gold coin is wild and it will substitute for all other standard symbols to help form winning matches; The leprechaun is the bonus symbol.

This is triggered by landing at least three of the leprechaun bonus symbols anywhere in view and you’ll receive one spin of the Bonus Spinner; this will reveal which of the following features are awarded:

During the base game the leprechaun may appear and add extra bonus symbols to the reels for a better chance of triggering this feature.

This is an optional extra bet which turns some reels into ‘Super Rainbow’ reels – any coins landing on them will award the multiplier on that coin applied to your stake.

Leprechaun’s Gold is an enjoyable addition to the Rainbow Riches series of slots – we always like the Big Bet option and there are plenty of features here to keep things interesting. Note that the highest RTP (97.75%) comes when the Big Bet is active.