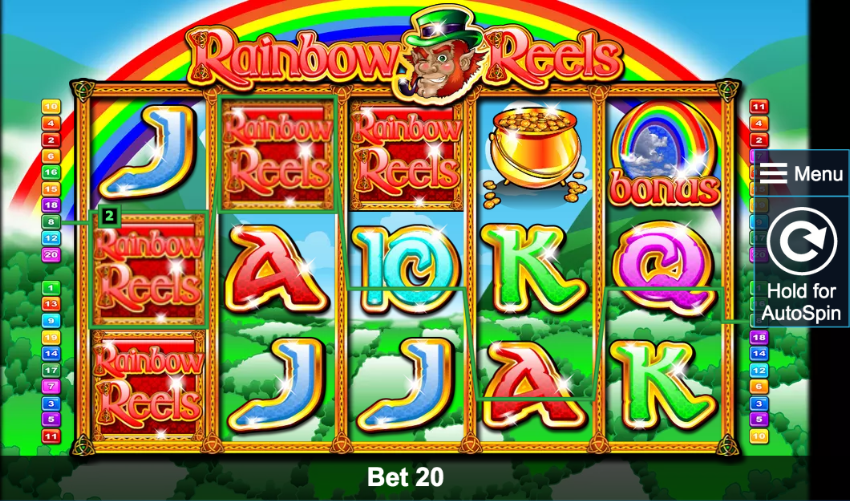 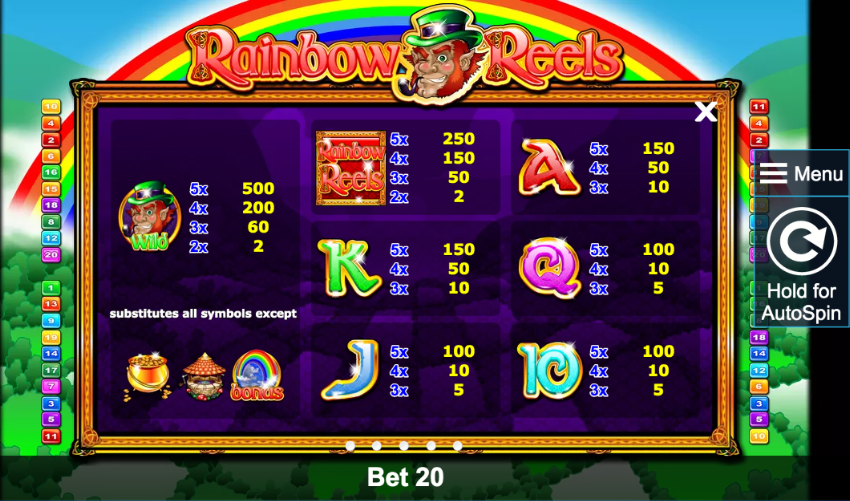 The sun always shines in Ireland – at least that’s what a multitude of online slots developers would have us believe and Mazooma Interactive are no exception. Here they bring us an Irish-themed game called Rainbow Reels which comes complete with three separate bonus features and some clear blue skies.

Rainbow Reels is a five reel slot with three rows and up to twenty fixed paylines; the reels spin within a Celtic-designed frame and the backdrop is a familiar one for fans of this genre – a colourful rainbow looming over green hills and fields.

Unusually there is just one theme-related standard symbol and that’s the game’s logo; the lower values are 10, J, Q, K and A.

The wild is a mischievous-looking leprechaun which will substitute for all others except the three bonus icons – the pot of gold, the wishing well and the rainbow.

This is triggered by landing three or more of the rainbow bonus symbols anywhere in view; you will now be taken to a screen displaying a number of four leaf clovers and all you have to do is keep picking them until you uncover the ‘Collect’ or reach the maximum prize of 500x your total bet.

Trigger this by landing three of the pot of gold symbols anywhere on reels two, three and four. Now just pick one of those pots to reveal a prize of up to 500x your total bet.

This is triggered by landing three or more of the wishing well symbols anywhere in view; just pick one of those wells for a prize worth up to 500x your total bet.

Each win can be gambled and this involves playing a double or nothing game and guessing whether the next card drawn is red or black.

Rainbow Reels is a playable enough slot and a good-looking game into the bargain; perhaps there could have been a greater variety of bonus features but nevertheless it’s well worth checking out. There’s an RTP of 95.00%.