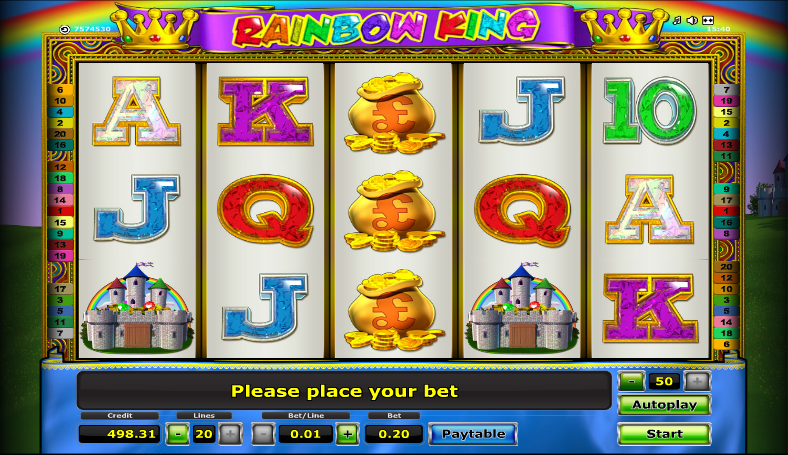 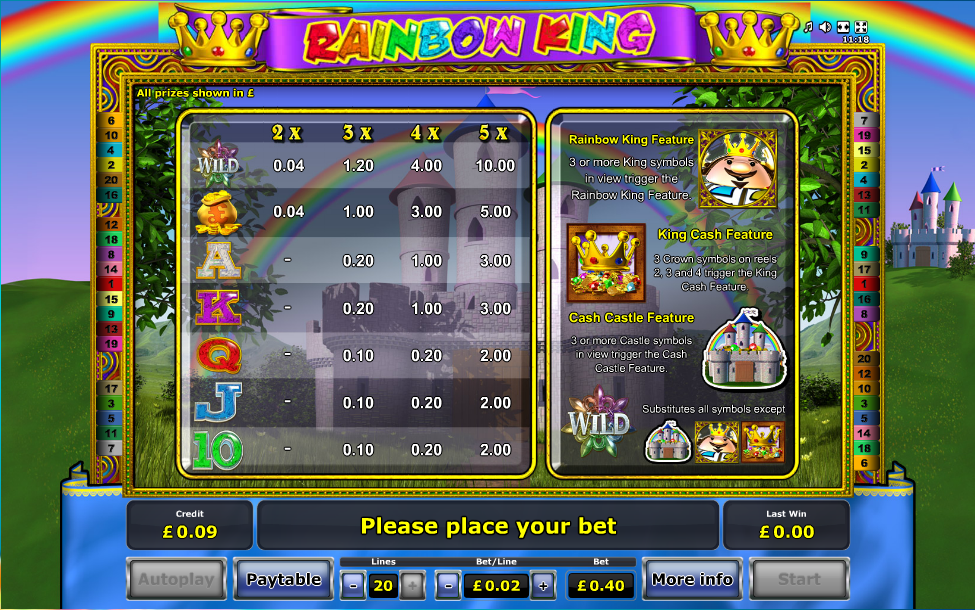 The Rainbow King is a cheerful-looking little character; his rotund form smiles out from the reels in this online slot from Novomatic and he’s also the key to one of the three bonus features in this neat and tidy game.

Like most Novomatic slots, the style of Rainbow King follows a particular format and there are five reels and twenty paylines to see you on your way.  The King’s castle is just visible to the right of the reels and a lovely rainbow arcs across the top of the screen.

Five of the six symbols are 10, J, Q, K and A and the the sixth is a bag of cash.  All the other symbols are related to the bonuses and so we have a colourful snowflake wild, the Rainbow King scatter, a crown scatter and a castle scatter.

There are plenty of bonus features in this slot and consequently a number of bonus symbols to trigger them as follows:

This is good fun and you’ll get to play a board game if you can land three of the Rainbow King symbols anywhere on the reels.  When you click ‘start’ the dice will roll, moving you around the board. Landing on jewels will win you cash prizes and landing on the king will win you Reel King spins.  When you hit ‘Take the Money’ you’ll go back to the base game or play the Reel King feature.

If you’ve won some Reel King spins in the previous round you’ll be taken to a new set of reels mostly featuring sevens; lots of wins are available here but as soon as you land a non-seven on the reels the round is over.

A nice simple mini-game – land three castle scatter symbols and you’ll get to pick one of those symbols for a prize of between 2x and 500x the total bet.

Similar to the Cash Castle feature, land three or more crown scatter symbols and you’ll be shown a screen full of crowns and asked to pick one for a prize of between 50x and 500x the total bet.

You don’t need to play maximum paylines because the scatter symbols will be active anyhow but the prizes will be proportionately greater if you do.  Go on – be brave!

We like Rainbow King because it combines Novomatic’s clean lines with more bonus features than normal.  The sparkly music is an appropriate soundtrack to your gameplay.