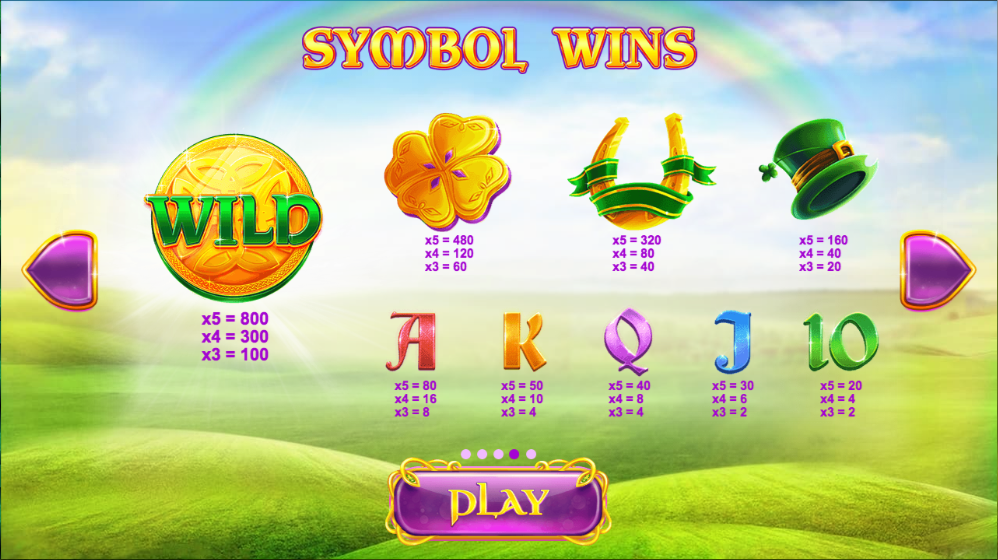 Four leaf clovers, golden horseshoes and pints of stout can mean only one thing – it’s a return to the Emerald Isle to check out another online slot machine themed on it’s  sunshine and legends. This game is called Rainbow Jackpots, it’s developed by Red Tiger Gaming and it comes with plenty of features and a progressive jackpot.

Rainbow Jackpots is a five reel slot with three rows and twenty fixed paylines; those reels spin within an archway carved and decorated in a Celtic fashion while the backdrop shows and countryside complete with the usual fabulous Irish weather.

The high value symbols include the golden four leaf clover, the golden horseshoe and the green leprechaun’s hat; 10, J, Q, K and A make up the lower values.

The gold coin is wild and it will replace all others to help form winning matches except for the Free Spins symbols.

This is triggered by landing at least three of the Free Spins scatter symbols anywhere in view; you’ll now be prompted to pick one of the three pots of gold to determine the number of spins awarded. The spins will play out and there’s a chance the Lucky Leprechaun features may be triggered during this round.

Trigger this by landing three of the beer symbols anywhere in view to activate a picking round to win a multiplier of your stake.

At any point during the base game or free spins the leprechaun may intervene and award one of the following mini-features:

Rainbow Jackpots is a cheerful and colourful addition to the teeming ranks of Irish-themed slots already out there; if you like them then you’ll almost certainly like this with it’s variety of bonus features, progressive jackpot and appropriately parochial music. It comes with an RTP of 96.24%.