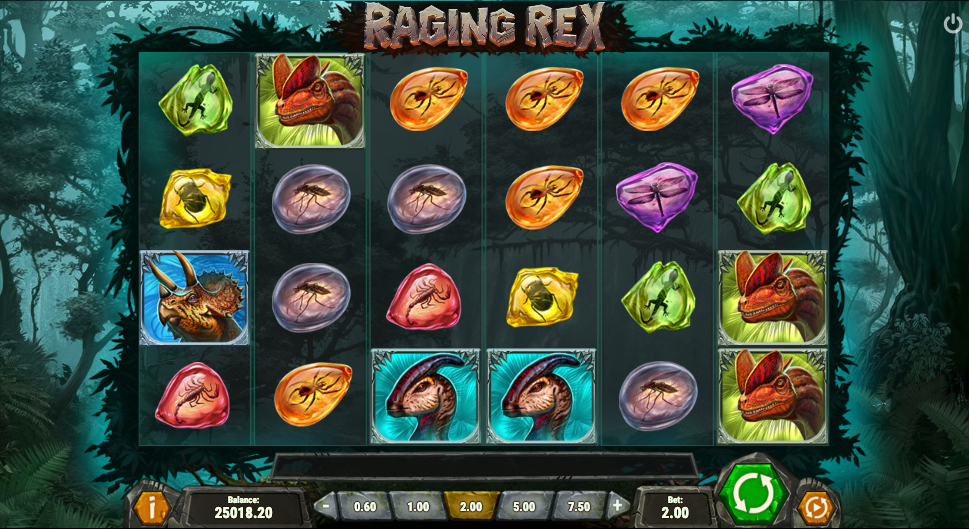 Jump in that time machine, crank up the levers and set the destination for a time when dinosaurs walked the earth and in particular Raging Rex, the angry star of this online slot machine from Play N Go; keep reading to find out all about the Raging free spins and Rampage respins.

Raging Rex is a six reel slot with four rows and a very generous 4096 ways to win; a steamy primordial forest forms the backdrop to the reels and it’s here gigantic insects buzz back and forth through the trees.

Four dinosaurs represent the higher value symbols (we can only recognise a triceratops) while six fossilised creatures in coloured, transparent stones make up the lower values.

The roaring T-Rex is wild and he’ll replace all others to help form winning combos except for the meteorite scatter symbol.

The T-Rex wild can appear stacked on the reels and if he fills one up completely then this feature is triggered; you’ll now receive free spins while the stacked wild moves one reel to the left. Once the T-Rex reaches reel one the spins end.

This is triggered by landing at least three of the meteorite scatter symbols anywhere in view for which you’ll receive the following:

You’ll get the choice of two free spins options now:

Landing another two, three, four or five+ scatters will award an extra 5, 8, 15 or 20 free spins indefinitely.

Play Raging Rex with the sound turned up and you’ll get the full dinosaur experience with terrifying roars amid the sounds of a living forest; the features tie into the theme very effectively so we’d recommend letting the T-Rex win you some cash.